Is it still worth getting into Imperial Assault?

My current lockdown-induced purchase disinhibition did its thing and now I have a copy of the IA core set at home. I just arrived today and I haven’t opened it yet, but I tried to read up on the campaign structure and content online. Am I correct that the core set and the big box expansions each provide their own campaigns? And you use content from the smaller expensions to spice up the campaigns with side missions and so on? Are the coop expansions from the app the same as campaigns that come in the boxes?

Am I correct that the core set and the big box expansions each provide their own campaigns?

And you use content from the smaller expensions to spice up the campaigns with side missions and so on?

Not quite just that. The smaller boxes have a short campaign too (about 3 missions long).

Are the coop expansions from the app the same as campaigns that come in the boxes?

No, the campaigns on the App are different.

Great thanks a lot!

I got my game and did a little inventory, when I realized that one of the ally/villain tokens is missing. Could somebody who has the game tell me which marker that is? I guess one of the grey ones? 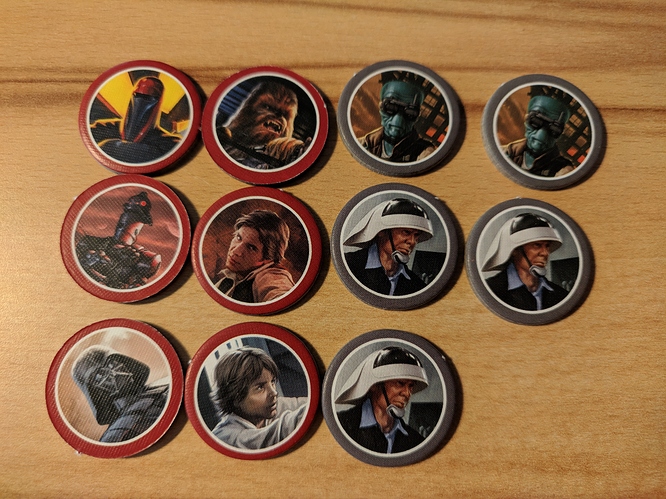 I think it might be General Weiss, which is a large rectangular token that represents an AT-ST, rather then a round single figure token like those above.

Yep, I’m right - see the link below for the available ally and villain boxes associated with the core box.

Learn More About These Expansion for Imperial Assault

Oh I do have that token! That explains it, thanks a lot!

We’ve bought Imperial Assault for our kids for Xmas. I assuming it’s going to get cracked open by Boxing Day at the latest.

So I’m not scrambling to learn and teach it at the table, what resources/ videos are the best to learn the game?

Any rules tips/ common mistakes that are worth knowing?

Didn’t Matt do a video teaching how to play?

Line of sight is probably the least intuitive rule, and is worth spending your time getting your head around. Otherwise I don’t think that the basics are very complicated, but IA does add complexity with keywords on cards that need a bit of glossary cross-referencing, particularly if you have long durations between sessions.

Ooh, one note: the App (which I highly, highly recommend) replaces/modifies some of the keywords and rules on unit cards and in the base game. There is a tutorial mission that will explain these differences to you, but keep in mind that there are a few small tweaks to help the game/app work properly.

The only really big one that I recall is that by default you’re allowed to do an action that heals/recovers, and the App replaces that with a finite resource (Medpacks? Bacta? Something like that) which you can do automatically instead of it taking an action, I think? Anyway, look them up before you play. It’ll make your life easier.

No, it’s still an action, it’s just that it only recovers strain unless you spend a medpac.

That’s funny. For the most part, I found the LoS rules to be very intuitive. However, there are some edge cases that are a bit confusing. But the general “draw lines from one corner of your figure’s space to two corners of opposing figure’s space without going through blocking terrain or other figures” makes a lot of sense and is usually very easy to determine.

Hi all, hopefully this is the best place to post an IA rules question.

We played the second full scenario using the app yesterday.

The first enemy placement was a group of Stormtroopers - the app gave 3 squares to place the 3 troopers in.

Later on in the scenario (in the transport) another Stormtrooper was placed. On the app, just a single square was given, so we only placed one Stormtrooper but I’m now wondering whether we should have placed a squad of 3 and placed them adjacent to the identified square.

Did we play it right, or should Stormtrooper placements always be a squad of 3?

I think that you should always follow the unit amounts on the card (upper left corner if I recall, a number of horizontal slashes) when instructed to add more models. Think of the cards representing a ‘squad’, which contains 1-3 people depending on the card in question.

Yeah, it’s been a little while since I’ve looked, but as memory serves:
New units are always deployed at full strength (whatever their default unit-count is, so Stormtroopers are 3, the hunting lizard-cats are 1, and so on).
Reinforcements return a unit to full strength (so replace however many were killed from the unit back to its maximum number).

Reinforcements return a unit to full strength (so replace however many were killed from the unit back to its maximum number).

Thanks both. I was suspicious that it was too easy.

With reinforcements, they don’t keep coming back if you can wipe out the whole squadron in a turn do they?

Yeah, the square is just where you start placing the figures, then you do adjacent spaces to that one where possible, and go out another space if necessary to fit everything. (This is also how they handle placing the player characters.) And I think Stormtroopers specifically can have an ability where they replenish figures.

The app will say whether or not any defeated figures come back. Otherwise there is no reinforcement as there is in the normal all vs. 1 game. Some stormies may have this while others won’t , as can other units. It all depends on the mission, I believe.

Yeah, you pretty much ignore a lot of the unit card when playing with the app. But it is a thing some stormtroopers will do in the app. Means you want to wipe them in a single turn, ideally. I don’t think I’ve seen anyone else spawn with it.