blush
I mean… uhhh… cough
Right! Serious writer being serious about the serious writing I have done!

Joking aside, there are two main options: Either “Tintian and the King’s Claw” (make sure you grab the Omnibus, since it’s cheaper than buying the chapters on their own), or “Starconvoy EH-76”.

Tintian is my re-imagining of the old Tintin comics, but in space and with a female protagonist. King’s Claw was my first novel, though, and it’s… well, I’m proud of it, but the pacing is slower and there are a few rougher areas. But, that stated, it is my most ambitious novel thus far, and it lays the foundation for the future Tintian novels (“Tintian and the Mysterious Meteor” is the only other one I’ve released thus far, but I’m working on the 3rd in the series right now).

Starconvoy EH-76 is much more standard space opera, and the writing is tighter and the pacing is generally faster. More military sci-fi, but with the focus on a news team trying to cover the war that slowly gets dragged into it. It also has my 3 favourite chapters I’ve ever written. The protagonist isn’t as likeable as my usual heroes, but I love the second-in-command… she was an utter joy to write.

Other than that… the next novel I’m working on (another Tintian) should be out in July, and the one after that in October-ish (that’s another stand-alone novel, although untitled at the moment… I hate coming up with titles). I have a romance sci-fi short story that I’m super proud of that I sold back in 2016 that’s available (or was… “Sci-fi Romance Quarterly” seems to be having some website issues at the moment, so maybe you can’t get it anymore…), and my website has a bunch of free short stories available here, but a bunch of them are set in the “Infinity the Game” universe so you have to know a bit about the setting to really enjoy the stories to their fullest.

Anyway! I’m so glad she enjoyed the novel! That’s great! And thank you for buying it for her!

Welcome, Bert! That avatar looks familiar, but I can’t place it…

Bandette? Or a character with a name long enough to satisfy the minimum post length…

Assuming you’re not just thinking of the SUSD forums (

So Annic here, from somewhere, doing something. I love playing boardgames of all kinds and could be considered somewhat of an omnivore: there isn’t much that I really don’t like.

I have started my presence here by copy pasting one of my first posts on the old SU&SD forum. I spend quite some on this one and believe it is still relevant.

So hope you all enjoy my first contribution to this new pasture and hopefully see you all around!

Talking of which, there’s a gif I’d love.

There’s a part of this video where Paul says ‘Tekelili’ As it’s the name of this forum, it would be great for marketing purposes.

Hello! Your gif expertise is legendary!

Thank you, I will establish “Ye Olde GIF Shoppe” here as well, I just need to manually

copy about 50 links scattered over even more posts… but I hope I can still copy them even after the forums are ‘read-only’.

Hi All. As someone who can take 10 minutes writing a single sentence and still up it mess I don’t think that I’m going to be prolific here but it seems like the right thing to stop lurking and join the new forum.

Welcome, even if you’re one of the quiet ones. (I.e. one of the dangerous ones…)

Glad to have you aboard @Name1ess

As this is new to most of us (thanks again to @RogerBW and the existing community), there are loads of new threads popping up so maybe you’ll find one for you, or start a new one!

Hi All. As someone who can take 10 minutes writing a single sentence and still up it mess I don’t think that I’m going to be prolific here but it seems like the right thing to stop lurking and join the new forum.

Literally all my sentences ever.

Congratulations, you have passed our entrance exam with filing colours.

If I could double heart this post, I would.

Hi everyone! I’m one of the horde coming over from the SU&SD forum. Thanks so much @RogerBW for your generosity in hosting us all. I swear we’ll help with the dishes! I was never a frequent poster on the old forums, but I’m really glad this community exists. I came out of the lurking woodwork a couple years ago at a time when I was at a job that was frankly terrible for my mental health. The SU&SD forum community gave me a wonderful reprieve from that reality. Thankfully I’m now at a job that is much more conducive to me stretching out from the fetal position, but I’m glad I still have this community to add warmth and levity to the world.

We have a cat named Bean. She is small and dark brown to the point of looking black. She arrived as a cranky street urchin, though not from Rotterdam and never went to Battle School. She does a good impression of the nightmares from Onirim.

Hi, I used to be a shoestring budget traveller and had a bunch of hobbies, now I’m a parent, technical writer, and translator living in Japan who sometimes plays boardgames asynchronously. My claims to fame in the boardgaming world are the Mage Knight, Pax Pamir 2, and Napoleon’s Triumph Vassal modules.

Our Bean is a princess. She’s the smallest of the cats we have, but also with the most attitude. Insists on eating her meal in her own bowl, doesn’t like her sisters approaching to snuggle her but will absolutely approach and snuggle them… and she snores like a lumberjack. 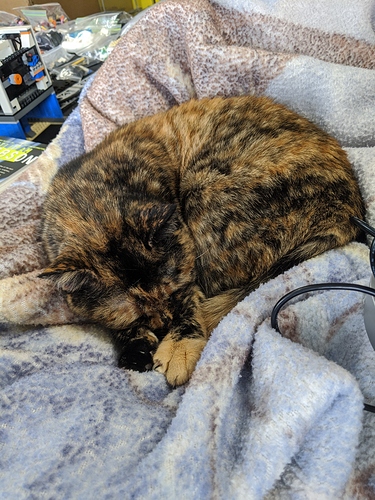 We have a cat that looks like that named Lorelei. When she sleeps on the couch on a brown and black blanket I wanna get her a hi-vis vest. Our Bean snores like the ghost of a lumberjack.