I'm playing a lot of Blood on the Clocktower

In person as well, never actually played it online. When my KS copy arrived I took it to the local games club for a couple of games, then a different local games club for some more games. Some people came along just to play, and at the second games club we kind of took over, then at the first we also took over. So at the end of July I booked a room in a pub, tentatively, but enough to book it again. And again. And now we’re alternate Mondays with an increasing number of people- 17 last time.

It’s honestly one of the best gaming experiences, almost completely removed from traditional boardgaming. I think what isn’t mentioned about it is that actually it can be quite relaxing. Close your eyes for a bit, then go to the bar and have a chat, then close them again. Or completely tense and exhilarating. I remember the controversy back during the KS, when £100 seemed like an outrageous amount for a boardgame, and people couldn’t believe it was actually that good.

Running some Sects and Violets games tomorrow and looking forward to it immensley. Anybody else play, or have any questions about the game?

We’ve played on here several times and have developed a bit of a meta and invented some terms.

Have your groups developed this?

We’ve definitely got a meta, one I’d love to subvert when playing. One is outsiders always reveal day 1 and get executed (saint and hidden roles excepted). BMR, the goon never lived past day 1, and the evil team never bothered converting them to evil. Do that once and the goon doesn’t reveal day 1 again. We’ve also got the expert players who are sus if they’re still alive day 3. Last time I actually played I was nightkilled immediately (but that was intentional, as I was the Saint and played to get myself night killed).

I am hoping to get an in-person game played at SHUX next weekend, since they are running games of it hourly. I have enjoyed the PbF games we have done on the forums, but I know it will be very different in a live environment and I am eager to experience it.

It’s great! Especially when everyone’s at the stage where people naturally form trusting groups and then bluff to each other.

Here’s a photo of my recent 16 player game 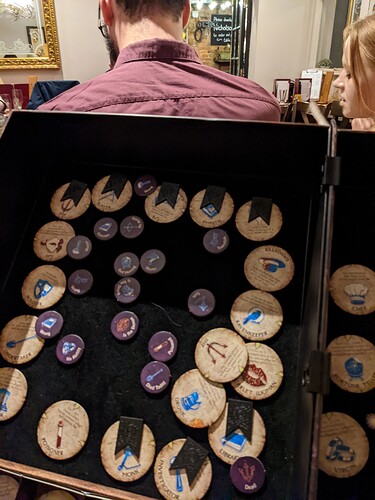