In the latest thrilling instalment of their spine-tingling podcast (Improvised Radio Theatre With Dice episode 101: Fundamental GURPSiness) the sages of High Wycombe reviewed The James Bond 007 RPG from Victory Games (1983), and Professor Mike remarked that “Hero Points” in JB007 are a bit like fate points in FATE. That’s an interesting observation, and it suggests connecting characters’ acquisition of Hero Points to their appropriate weaknesses rather than to frenetic activity in resolving tasks out of combat. I’d leave the rules for spending Hero Points as they are.

Mulling over Our Mike’s remark, I stumbled across the thought that Fields of Familiarity in JB007 (which the Prof correctly described as “half baked”) might similarly be seen as like Investigative Abilities in Gumshoe. The rule for them is that any player who has them at all is an expert, and that they just basically always work. That is simply a useless rule for such FoF as “Golf” and “Snow Skiing” because to use them in the game even as they occur in the films you have to compare PCs’ results against NPCs’. But in the case of “Forensics”, for instance, that procedure is still bleedingly modern.

If you were going to modernise JB007 mechanically¹ it might be a good idea to replace some of the Fields of Familiarity with skills and augment the rest with investigative abilities cribbed from Night’s Black Agents, with a suitable tweak to the rule about them just always working.

¹ Rather than just update its setting and equipment lists as Joseph Browning’s retroclone Classified does.

FoF felt to me like the sort of thing that’s handled reasonably well by FATE Aspects – I don’t need to list all the things that I learned in my career as a professional golfer, I just say “I was a professional golfer” and anything which reasonably flows from that is a thing I can do. But as you say, some of these are skills (in a mechanical sense) and others aren’t. (And what FATE can’t do without losing its elegance is say “I was a soldier who was a lousy shot but otherwise competent”.)

I think that if I were going to build a new system to do the things this one does I would start with a slightly expanded skill list which should be able to cover all the things that actually get skill rolls, and accept that some FoFs will give in-game skills and others won’t. That’s the framework onto which this needs to be built.

I think that that applies more to Professions (p.28) than to the Fields of Familiarity that you get from them. And even there, from my recollections of FATE,¹ having as Aspect like “former Royal Marines commando” would be a chance to spend Hero Points rather than the “it just works” mechanic of investigative abilities in Gumshoe.

¹ My recollections of FATE are aging; recent editions might have changed how things work.

Granted, and I haven’t looked much at FATE recently. I think I may have been conflating the two things in JB007.

So I’d probably remove Fields of Experience completely, rolling them either into the skill system (“Medicine”) or into professions (“Burglar”). A profession becomes an Aspect-like thing which lets you do non-skill stuff (“any Royal Marine would know this”), but still carries with it a list of suggested skills that a member of that profession would be expected to have.

I don’t remember whether I said it in the podcast, but I found an interview with Chris in which he explained the Abilities (Connoisseur, First Aid, Photography): originally they were skills, but players wouldn’t buy them. My answer to this would be to make them skills but include them in the agent training package, thus providing a minimum level but not preventing further purchase. This also suggests that some skills should be more expensive than others.

One thing I like in the many Pathfinder options is the Background Skills: characters get 2 points per level which they can only put in a limited selection of skills that aren’t really relevant to adventuring. This is where my characters get to be professional authors, expert knitters and so on, or have a zealot’s grasp of Lore (chariot racing).

This also suggests that some skills should be more expensive than others.

At least the second edition of Big Eyes Small Mouth had a variety of skill cost schemes for different genres.

So it might be “what if there were a second edition of JB007 released now”.

And what FATE can’t do without losing its elegance is say “I was a soldier who was a lousy shot but otherwise competent”.

Have the latest editions lost the Skill Pyramid? Is that Fate Accelerated Edition?

It didn’t seem to offer that in my reading through it some time ago. Please do not take anything I say about FATE as authoritative; I do not feel I have understood it enough to play, never mind to tweak.

My agenda always leads to my replacing James Bond 007 with ForeSight, which is recognisably a descendant of JB007 in terms of mechanics but more elegant in play. It is not specialised for cinematic spy adventure, though, and lacks the recognition mechanics and random encounter system.

In this thread, though, I was speculating idly — i.e. without any project in mind —, starting from Mike’s observation that JB007’s Fields of Familiarity have a Fate-like aspect to them.

It didn’t seem to offer that in my reading through it some time ago.

Well, last time I actually played FATE was in 2011, when its new version had just hit the ground as Spirit of the Century. (It was @thelibrarian’s campaign Rockets, Spies, and Private Eyes.)

My character had the following skills:

When I had to resolve a task, I rolled 4dF and added the sum to my effective level in the relevant skill. If that met the difficult of the task set by the GM my character succeeded. If the sum exceeded difficulty I got Shifts and maybe even Spin.

I could add +2 to a result by spending a Fate Point, if the task was covered by one of my character’s Aspects, which were

Besides that he had five Stunts with special-case mechanics (In Plain Sight, Master of shadows, Quick exit, Hush, and Weapon of Destiny) and spoke English and Japanese.

But anyway, there you are: an officer and a gentleman with basic Guns skill.

I take it that things have changed?

At least the second edition of Big Eyes Small Mouth had a variety of skill cost schemes for different genres.

That was cute! It nearly tempted me to run BESM, but I didn’t care for the Soul stat or fixed damage.

You beat me to describing a soldier with poor aim in FATE. Make soldier an aspect, and then have a low skill value in Guns. And if you want to lean into that, never tap it for boosting your Guns skill.

I only know of FATE from the Dresden Files RPG, but I believe most of the rules are the same.

That was cute! It nearly tempted me to run BESM , but I didn’t care for the Soul stat or fixed damage.

I’m of two minds about that sort of thing.

On one hand, if I’m running a campaign where I assume that there is a supernatural or mystical element, then I rather like having three basic aspects of body, mind, and spirit. BESM with Body, Mind, and Soul, and DC Heroes with physical, mental, and spiritual traits, and In Nomine with Corporeal, Ethereal, and Celestial attributes all fit this pattern, and it works for me as an expression of a certain worldview.

Big Eyes Small Mouth was a superb fit to Under the Shadow, based on Tolkien, and to Manse, original fantasy. It was an odd one to Vor, which was based on the Barrayaran novels, but somehow it still seemed to work.

I only know of FATE from the Dresden Files RPG, but I believe most of the rules are the same.

I think — from my utter bewilderment when trying to generate a character for it — that Fate Accelerated Edition was significantly different. There were no skills. Slots in the pyramid were occupied by “approaches”, which I did not understand at all. Aspects had been limited and codified.

Yeah, I know nothing of the accelerated edition, other than I believe they lessened the number of aspects a character has. Which does make some sense, as it was something like 7 per character, which is a lot for a GM to try to remember in order to touch upon them now and then.

I know the rules encourage players to do it themselves, but I found in the few times I ran a game that it helped knowing them to purposefully put some of them in front of the players rather than it occurring mostly through happenstance.

To ease the problem of a GM trying to remember my Aspects, I designed an A3 character sheet to be read from the other side of the table: 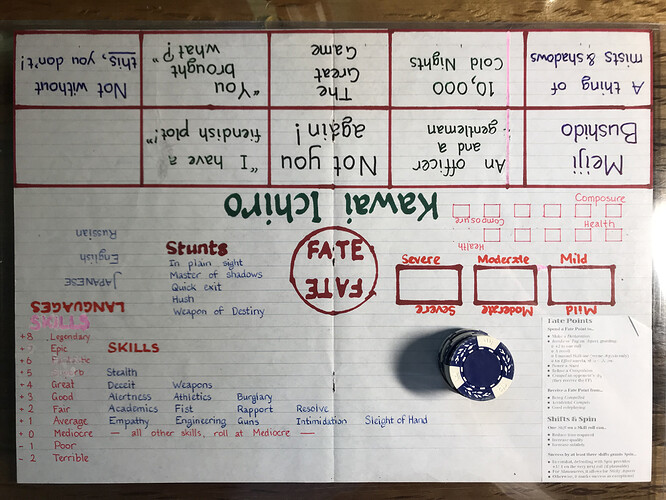 As I recall (poorly), you could also go for an Aspect like “worst marksman in the 9th Division” to cover both elements.

OK so I’m causing confusion with my misremembering. What I’m thinking about for JB007½ (not a final title) is to have a sensible skill list (probably a bit longer) and then an optional “background” which is the broad things that someone who did that would know (possibly even “yes, my old CO is in charge here, he’ll do me a favour”).

Mechanically, well, I don’t like the multiplication. But I think I may have a way round that. Working up some details.

Neither did I, at first. But in a few weeks I came to the conclusion that the EF:QR resolution system is the poodle’s pyjamas.

I agree with you about the skill list. It doesn’t need much more, but Mechanical Engineering or such could take its place with Science and Electronics, and there are definitely a few others. It would help for Evasion to be re-named to “Athletics” or “Parkour” or something, “Mountaineering” to “Climbing”, “Sixth Sense” to “Alertness”. “Diving” should be generalised to “Swimming” and “Connoisseur” to “Savoir-faire”.

On the other hand a bit of judicious pruning could be done using the criterion “in this genre, do we ever want to deal with the chance that someone might try this and fail? Do we ever care whether it is done well or badly?”

Cryptography, Photography, Demolitions…. Sure, clandestine operatives do them in genre. But do we ever need to apply the resolution rules? All PCs can do them, we never care how well. No need for rules.