I have owned very few of Friedemann Friese’s games but played a number of them. I saw Faiyum in the BGG September/October preview and I liked the cover. 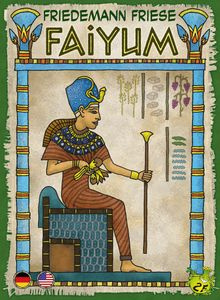 There isn’t much information or images but there is both an English and a German rulebook and card glossary. I scanned the rulebook and the post FF made about the game on his BGG blog.

Ignoring the beige/papyrus? artwork, it looks quite interesting. There’s a board of hex fields where you get to build cities and roads and harvest resources from fields using your “deck” which you acquire from a Power Grid style market where the cards get ordered by numbers. The interesting point about your deck is you never get to pick up your deck again, instead you can recover cards in order of last played first out, so like in Aeon’s End you would have to be aware in which order you play the cards. The cities and roads and workers that are built do not belong to any one player (I think that’s why he mentions Roads & Boats which I haven’t played in his blogpost) and everyone can use them.

Obviously, from just a rulebook and a bunch of cards I cannot tell how much fun this will be and not all FF games are good (504 & Fürstenfeld, I am looking at you.) but I’ll be waiting for actual reviews to come in and hope this fulfills the potential I see here.

Could be though it sounds a little more elaborate than that.

I am guessing that many of the more productive designers of the somewhat older persuasion (Knizia, Feld, Rosenberg, FF are examples that come to mind) have some kind of 504 like toolkit in their brains. Which could be why we recognize a Rosenberg from miles away… 504 could well be FFs attempt to put it out there. Knizia seems to have several different toolkits… looking through that preview every other game seems to be his (of course not, but still…)

I liked the idea of 504 a lot. Then I bought it and it turned out to be tedious to put together something that ressembled a game. Every single one of the ones I tried was just barebones mechanics with a lot of questions left to ask how something would work and not particularly exciting.

The tons of material were just hard to keep track of–this was before I started building inserts–and setup was awful.

I gave it away with little regret in my great purge of 2019.

I think that’s my point though. It felt very much like a designers toolkit of mainly A with B with C variant and if the kernel of something interesting is there develop it up for a bit.

FF has long played with mashing up mechanisms. See Copycat. Even his opus, Power Grid, uses mechanisms from other games.

I’m interested in Faiyum, but I still haven’t played Futuropia and I’ve only scratched the surface of Fabled Fruit. Until I get a group I can foist these games upon, I’m reluctant to buy more just out of general interest. Plus, I still have a few kickstarters to arrive. ; )

Fresh Fish and Power Grid: the Card Game are the only ones I enjoyed.

Herr Friese is a guy who likes to try things and I appreciate that.

I just started playing “Finished” on iOS, can’t recommend… I am missing two hours of sleep I should have gotten tonight. It’s addictive and I am terrible at it. I should be better at this

I’ve only ever played Power Grid once, many years ago.
I like Freitag every once in a while when I play it but the rules are somewhat hard to learn.
We played Finstre Flure a couple times and that was fun and there are a few others I’ve played over the years I am sure but not enough to even remember the name. The only game of his I own at the moment is Freitag. I heard some good stuff about Faultier (aka Fast Sloths) but it’s on my “want to play” rather than “want to buy” list.

This one has hex-fields a major weak spot of mine, so I am way more interested.

Maybe it’s just me (and a minority number of people).

The removal of the map cuts down on a lot of maths. And it’s a card game, so Im not expecting it to stay. I find that bit to be a big maths homework and doesnt return much fun back. The most interesting decision is usually: should I spend €3 more to screw over that guy?

The resource market is random. So supply isnt static, which I didnt like in PG. The random spawns starts at the most expensive price so players arent making decisions on the fly. Changing supply will affect the auctions.

I found PG to be limited, I guess. So I end up liking the shorter version and comes in a small box too.

Thanks, always good to hear an opinion that goes against the grain.