Episode 99: A Favour You Can Pick Up And Load

This month, Mike and Roger regret a failed campaign, do each other favours, and contemplate the role of the trap in a modern game.

Re Traps (and especially the Grimtooth’s school of murderising), one of my favourites is the trap aimed at the players being greedy. The perfect example is the room trap with a very low ceiling which has a Deluxe Magic Staff wedged exactly between ceiling and floor. In T&T a Deluxe Staff is a major magical item and also happens to be indestructible… It’s quite a prize, but on the other hand you may not need to go through that room, or if you do then you can just creep past and leave through the door across the way. The staff is indeed holding up the ceiling: if you can come up with a scheme to get it then good for you, you get the reward, but attempting to deal with the trap is entirely your choice.

An endless parade of unavoidable, fully functional deathtraps is dull. A trap with potential later consequences (the bridge collapses behind you because you failed to disarm the trap, but you still - just - made it across… What happens if you need to retrace your steps in a frantic hurry?) is much more fun.

I should also say, @RogerBW, that I’m feeling particularly called out by this episode

Oh good. If anyone can break my general feeling of not really liking Hero, it’s probably you.

As one of the players in your Ars magica experiment, I’d like to thank you for digging into 13th century Pickering and bringing the world to life briefly. I certainly had fun running into a Roman patrol lost in time.

I occasionally lurk in games in rpol.net, and have played in games on the Atlas forums. Play By Forum seems to be very prone to crashing and burning quickly, and the ones that run a long time and persist seem to have crises of stopping and then trying to restart. I do not know of any magic tips to ensure success and encourage it to keep flowing. Does anyone know of a guide or a podcast that covers this well?

Eclipse Phase has several systems of money including reputation based wealth (as you referenced about “what some transhumanists want”), it shows a reputation-based economy in a way that gamers can understand (so it beats several leading transhumanist essayists on that score).

The Profit Factor (Rogue Trader)/ Influence (Dark Heresy 2nd edition) replaced the book-keeping of money with having a stat that you roll against with a modifier for how rare stuff is, and modified by your skills in trading. It’s pretty good for abstracting money and getting stuff in the grim darkness of the 41st millenium (and the Rogue Trader version modifies for scale, so you can equip regiments with small arms or buy new space ship parts).

Original Conspiracy X was great on two fronts - it had a mechanism for building a base, and the stuff in it was bought with points based on character’s Influence stat. The sorts of things it could buy depended on the sort of influence - Science is great for getting lab gear and computers, but it won’t get you guns, where Criminal influence gets you stolen guns, Police influence gets you law enforcement level gear and Military influence gets you the big guns. The other front was pulling strings, so having a day job with useful influence was great - are you a law enforcement officer who can get access to evidence and crime scenes? Can you use your security clearance to get into all sorts of forbidden places? Are you so high up in the conspiracy you can borrow alien artefacts?

Sadly, the 21st century has disillusioned me to Conspiracy X - the conspiracies of the 2020s are more batshit crazy than those of the 90s, and government power in the US seems a curious thing - I no longer believe the CDC can enforce a quarantine (whereas in the 90s we were certain, like in that movie Hotzone!) and the FBI may not be as apolitical and competent as we thought. 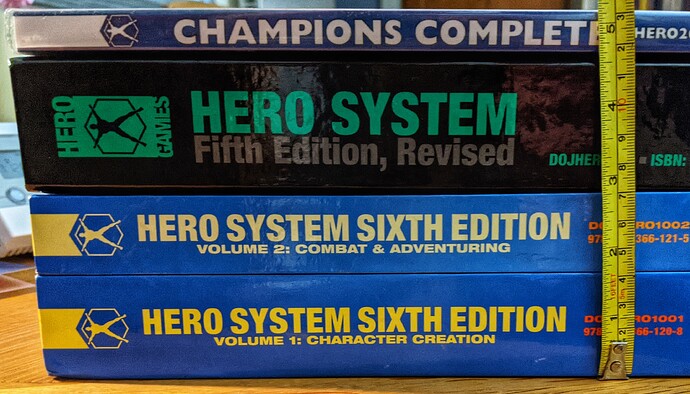 Thickness comparison for assorted Hero rulebooks: volumes 1 and 2 of the 6th edition in blue; the bulletproof black book that is FREd (5th revised edition); and Champions Complete, which is now considered the standard 6th edition rulebook. There’s a Basic book which is considerably slimmer still. I don’t have the current edition of GURPS so somebody else will have to measure that.

In defence of the staggeringly heavy twin volume set, an awful lot of what’s in there is either example and extended explanation, or else rather fringe rules not used by many. Lots of colour art too, by Hero standards. Nonetheless, it’s the prime example of what happens when your rulebook is written by a lawyer.

No photos, but my GURPS 4th comes to about 40mm, which is about Hero 6 volume 1.

And yeah, not a lot of extended explanations.

I do believe there’s a video on YouTube of a copy of Fifth Edition Hero (non-revised, slightly smaller) stopping a .22 long rifle round.

Tish, Roger — GURPS does indeed have Favors; p. B55. “A Favor is a one-shot Ally, Contact, Contact Group, or Patron.” It costs one-fifth of the permanent version, but once it’s actually been used once, it’s gone.

But to be fair to you, players hardly ever take this. In my experience, they have a violent allergy to paying permanent points for expendable things, no matter how great the benefit. They’ll spend points on fairly useless things like a shot, provided that they are persistent. There’s probably a principle of human psychology in there somewhere.

Yes, fair point – but it’s a crude tool and I’ve never seen it used, probably for the reason you give. (Similarly Trading Points for Money, which also suffers from being a worse deal than Signature Gear – 10% of campaign starting cash for 1 point, vs 50% and you never lose the gear you buy with it.)

I note that Torg and first edition Shadowrun, late 80s/early 90s games, both had “you can spend these for immediate benefits, or save them up to improve your character at the end of the adventure” points (Possibilities and Karma respectively). Spending in Torg was very rare, and I don’t think I ever saw it done in Shadowrun. Since then I think the standard model has shifted more towards separating ephemeral benefits from character improvement, as in Savage Worlds and Genesys.

Since then I think the standard model has shifted more towards separating ephemeral benefits from character improvement, as in Savage Worlds and Genesys.

Early Savage Worlds had the rule that unspent bennies could be converted to xp based on a random roll.

At the end of each game session, roll 1d6 for every benny you have left over. Each roll of 5 or 6 gives your hero an additional Experience Point.

This resulted in players not using their bennies during play and they have since dropped that rule.

Thanks! I didn’t look at SW until well after it had come out, and hadn’t been aware of that.

Regarding Favors, nothing about the discussion made me think, there needs to be game mechanics for this. Rather, favors (owed or earned) are just another aspect of your relationship with a particular NPC or organization. Standard roleplaying and associated game mechanics apply. I don’t particularly like “social combat” rules and I don’t feel they are needed for handling favors.

Regarding Traps, it occurs to me that traps are a type of ambush and players hate being ambushed. To “play fair,” the GM has to call for a bunch of perception rolls to detect the trap before hits triggered or to detect the trap while it is being triggered (the “click” mentioned on the podcast). That gets boring really fast. In the days before perception mechanics, the PCs were wholly dependent upon the GM’s descriptions and that lead to prolonged Q&A and the rpg equivalent of pixel bitching.

In my experience spending in Torg was pretty common. The most overwhelmingly powerful PC I ever saw in Torg never spent Possibilities on character improvement, just on every roll that was the least bit important.

Spending in Torg was very rare, and I don’t think I ever saw it done in Shadowrun.

I have seen it done in Shadowrun and have done it in Shadowrun. It was awful. It’s a part of why I abandoned Shadowrun for many years. Play seemed to inevitably have a point at which karma had to be spent or the run ended in flames. Then after spending the karma you had the Johnson betray you and the run ended with no advancement and no cash reward.

While I can appreciate that from an academic genre point of view it was no fun at all for players. And when the GM seemed to enjoy it that made it even less fun for the players.

Rather, favors (owed or earned) are just another aspect of your relationship with a particular NPC or organization.

Yes, though I think it’s nice to have some kind of rules framework. (I ignore a lot of rules when I’m running GURPS – usually it just comes down to “roll skill” – but if we have a complicated situation the rules are there for me to fall back on. As a GM I am necessarily arbitrary, but I like my decisions to be well-informed.)

In the days before perception mechanics, the PCs were wholly dependent upon the GM’s descriptions and that lead to prolonged Q&A and the rpg equivalent of pixel bitching.

Which was a different sort of boring, to me – yeah, it’s not “roll to see how many resources you have to spend”, but a detailed door-approach procedure can be pretty darn tedious.

In my experience spending in Torg was pretty common.

Interesting - I found them really not all that effective for skill rolls (though obviously needed for bubbles and disconnection-fixing).