Episode 76: Pyromania is a Lifestyle Choice

This month, Roger and Mike (with helpful contributions from Anzac the dog) isolate an island, contemplate blindness, and look forward to the end of the world.

We mentioned The Grognard Files playing FATE, Stars Without Number (in two parts) until 8 April, and Traveller T20 until 15 April, at the Bundle of Holding, Pacific Overtures, The March North, Seven Samurai, The High Crusade. Alarums and Excursions, Bird Box, Out of the Violent Planet, Hex Hex, Janissaries, Doom Patrol, They Live, The Laundry Files RPG, The Country of the Blind, Rat and Roach War, In the Mouth of Madness, Seeking a Friend for the End of the World, On the Beach, Inconstant Moon, The Day of the Triffids, and The Death of Grass.

I’m rather fond of Richard Tucholka’s Rogue 417 setting, which includes a couple of adventures set at different points in the apocalypse. A few years ago I ran a one-shot for Whartson Hall which took place at the point where a decision had to be made whether to believe that things will settle down or just abandon their posts and run for it… wherever “it” might be, since it’s unclear to the characters quite how extensive the collapse is.

Because it’s part of the Fringeworthy Interdimensional RPG there is a possible escape for the PCs, so you can run a campaign through the collapse and still move on to something a bit more hopeful. I’m still considering a return to the setting from the other side, with Fringeworthy characters finding their way to the Rogue 417 world some time after the initial crisis. 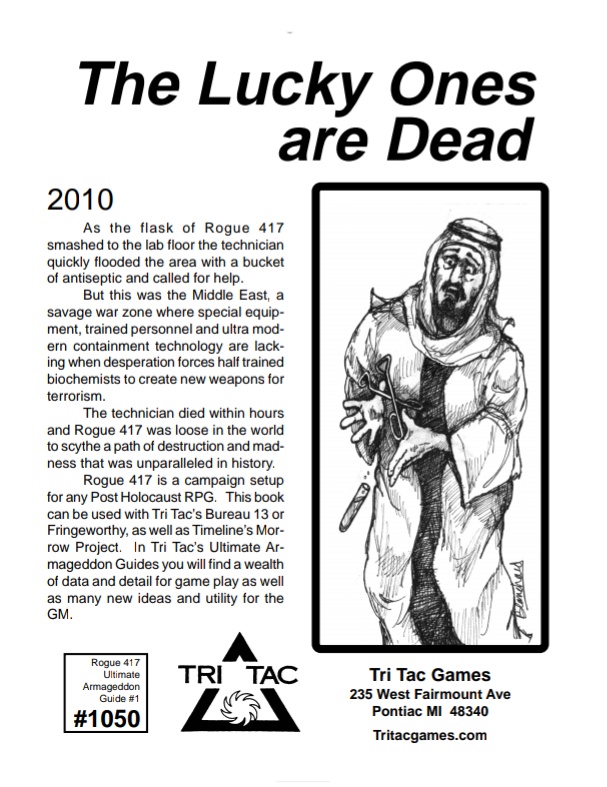 Er… how does the icon blindness work? Surely letters are symbols too? What about languages where the letters are little drawings, like hieroglyphics? And what about branding? Can you read the word “Coca Cola” if it is in plain text, but not if you make it cursive and wrap it round a can? Presumably those characters all get killed in a horrible pile up the first time they encounter a stop sign or a one way street sign.

I was once in a Vampire campaign where no-one heroically sacrificed themselves because the GM had neglected to tell the players that this was the last session. We were all waiting for the boss fight to happen, and thus ignored the “get squished by a falling building while saving a baby” opportunity presented to us. Apparently if we had, we would have staved off Gehenna/Ragnarok by redeeming our souls, or something. Talking about it afterwards, most of the players had an attitude similar to mine: yeah, saving the baby would be a cool thing to do, but I like this character and don’t want to play a new one for the last couple or sessions of this campaign.

Conversely, when a PC in my Summerland campaign heroically sacrificed himself to The Wyld Hunt to save a village, me and the players unanimously decided that was a fantastic point to end the campaign. I had a couple more sessions worth of plot, but it was better to go out on a high point.

Meanwhile… at what point does the heroic sacrifice morph from Horatius (and mates) at the Bridge into General Custer at the Little Big Horn? Sometimes from a player perspective you can’t tell the difference!

I thought it was in GURPS Cyberpunk but apparently I was wrong. Here’s what Compendium 1 has to say:

Your brain is incapable of processing abstract images or symbols. Graphical computer interfaces, maps, heraldic devices and even magical runes are completely meaningless to you. You may not learn Cartography, Heraldry, Rune-Lore or any other skill that involves the interpretation of patterns or symbols. You also cannot use any computer interface except for text interfaces or full, environmental virtual reality. Finally, since you cannot comprehend magical symbols, you cannot normally learn magic except through oral tradition.

This is not the same as Illiteracy: ordinary linear text can be read normally by Literate individuals with this disadvantage. Like Dyslexia, this is a structural shortcoming of your brain, and cannot normally be bought off.

Hm… Letters are fine, but runes are not… I can’t see that disadvantage leading to any arguments at the table, dear me no.

Just listened to this.
The conceptual section on ‘emerging into the wider world’ was interesting.
My advice would be to broaden it out from pseudo Tokugawa. Note, @MichaelCule that one of the issues of secluded Japan was that the samurai class became neutered, as wars ended in the stable Shogunate.
Earthdawn’s launching conceit, that of mortals hiding for generations in Kaers, away from dreadful Horrors, seems ready to explore this campaign.
The Dark Night idea (was Asimov the first to write of this, or someone else) which is an analogy for the Dark Ages, recurs in SF and SF RPGs.
Earth suddenly realising there is a fully developed Galactic civilization out there, and we are stumbling barbarians and patsies for interstellar conmen has potential.
Nice discussion.

Earthdawn’s launching conceit, that of mortals hiding for generations in Kaers, away from dreadful Horrors, seems ready to explore this campaign.

I could see this as an Earthdawn setup, but you come out of your anti-manaclypse bunker to find a technological civilisation.