Episode 65: I Shoot the Horde of Bees With My Rifle

This month, Mike and Roger look at RuneQuest that isn’t RuneQuest, ponder why some campaigns just flow more easily than others, think about GURPS books that were never written, and work on long-term goals.

Michael was referring to this gentleman and not this one: 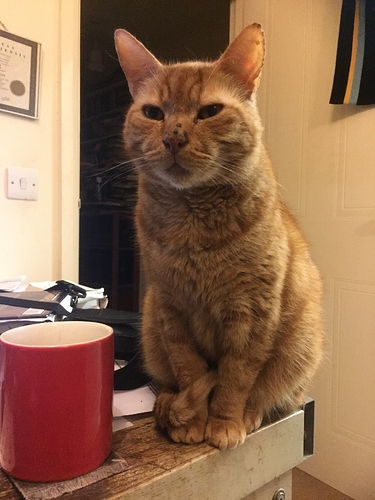 (We do get free access to the Bundle of Holding contents, but this happens whether or not we plug them.)

I too want to run/play a ‘responding to disasters’ type of campaign. I posted about it on UK Roleplayers You heal people and you give them stuff but few people were enthusiastic about the idea.

The 1941-42 period in Roger’s WWII game was nicely handled. We got to learn about lots of German magical groups and quash their plots against the UK. This was rather parallel to what MI5 (whom the characters work for) was doing itself in that period. It may have been hard work to run, but it built up the characters and the setting very well.

If you are going to write Disasters: Fire, it may be worth taking a look at Sandra and Woo for artwork. There’s a supporting character, Larissa, who is a pyromaniac, which clashes nicely with the artwork style.

Ah, so that’s where all the people from ukroleplayers went - to software that’s even more horrible to use if you’re me, plus advertisements. Oh well. I tried. (Discourse is about the only forum software I’ve used that I don’t hate.)

I love the idea of a disaster campaign but I can see some obvious drawbacks:

If you mention “Bomber” Harris to people in the UK, if they’ve heard of him at all the impression is usually “murderous idiot”. It seems to have been more a combination of “we don’t actually have good evidence that point-target bombing is working” (and indeed it wasn’t a lot of the time), and “our lives are vastly more valuable than their lives”.

I’d like a GURPS: Thirty Years War and a GURPS: Austro-Hungarian Empire . I don’t actually play GURPS, but the sourcebooks are always worth it.

Sure. Harris and Portal believed those things, but they believed them within the context of a commitment to strategic bombing. Their syllogism was “precision bombing isn’t working, therefore we must adopt area bombing; targetting German strategic industry won’t work, therefore we must target civilian populations”. They refused to consider the alternative “let’s stop telling Cabinet that strategic bombing can win the war all on its own; let’s reallocate effort to air supremacy, tactical and operational support of the Army and the Navy, and even let resources be reallocated to the invasion”.

Harris’ nickname within the RAF wasn’t “Bomber”. It was “Butcher”. But reporting that would have been bad for morale. The nickname “Bomber Harris” was made up for propaganda by the Ministry of Information.

Some of the UKRoleplayers folk have gone to The Tavern. https://www.gamingtavern.eu/tavern/index.php Many of them haunt both places.

An excellent quote from @RogerBW “I have other ideas for disasters.”

My favorite part of old GURPS books was the sidebars so some of it is what sidebars would I like to see. Maybe a GURPS: money would be good for some broad strokes on economics around a campaign. GURPS: food similar.

On the fun side GURPS: Pegana would be a neat as a dreamlands and atmosphere in campaign book maybe.

In re: Harris and bomber command; Cherwell’s misuse of statistics and invention of the sinister “dehousing” term deserve additional rebuke. The pull of resources from Coastal Command is a notable bit of by-blow damage there as well.

The received wisdom regarding GURPS China, with which I can’t really disagree, is that it’s stretched too thin. You could probably have got at least three good and distinct 128-pagers out of “China”.

The one historical-setting book that I’d still really, really like to see, either as a classic 128-page general book or a contemporary, more focussed, 40-80 page PDF, is GURPS West African Kingdoms. I know just enough to say that there’s clearly something hugely fascinating, richly exotic, and highly gameable there, but I’d have to do insane amounts of research to go from “interesting artworks, a truly extraordinary musical and bardic tradition, WFRP-grade fancy throwing blades, and a few names and stories” — which is what I know — to a playable game. There must be someone out there who’s already done that reading…

The three third edition supplements that I know were considered but never made print, to my active regret, were GURPS Difference Engine, which I believe was even licensed but suffered real-world catastrophe, GURPS India (first draft not considered up to snuff), and GURPS Elizabethan Fantasy, for which I know an interesting proposal existed. I know that someone talked about an English Civil War book, too, but I doubt that the company encouraged him to go beyond first enquiry.

Which reminds me — there is at least one ECW-based RPG on the market, I should point out; Cakebread & Walton’s Clockwork and Chivalry.

A friend of mine, some of whose campaigns I played in, wanted to do GURPS Dragaera, and had worked out different 3/e systems for Dragaeran and Easterner magic. I never heard details, but for whatever reason it didn’t work out.

A nice complement to GURPS West African Kingdoms could be an African Diaspora book, spanning from the American South through the Caribbean to Brazil. I ran a supernatural horror campaign set in 1930s New Orleans, using Tell My Horse and Blues Fell This Morning as sources for supernatural beliefs. . . .