Episode 120: You Could See Coronation Street From There

It’s our tenth anniversary! So as a special exception to our usual format we talk to each other.

Michael is even more forgetful than normal. GREYHAWK was in force when he first played DnD and BLACKMOOR was the one after that. It’s a long time ago: please be patient.

We went on with: Blackmoor, lava flowing down the Thames Valley, The Elfish Gene, Superhero 2044 (not 2024), Call of Cthulhu, Rumble at the Tin Inn, Alarums and Excursions, GURPS Banestorm, and the Sentinel Comics RPG,

Music by Kevin MacLeod at incompetech.com and other royalty-free sources.

Is the file okay? The sound keeps dropping out on me playing here, playing from the download link on the /podcast/ site, and when listening through Apple’s Podcast app from iTunes.

Hm. iTunes just get it from us and cache it. I’ll have a poke. Timestamps?

Perhaps there was a problem with my Internet connection. It seems strange, though.

FWIW I haven’t changed the file since it went live.

Sometimes the charm of a game never leaves: 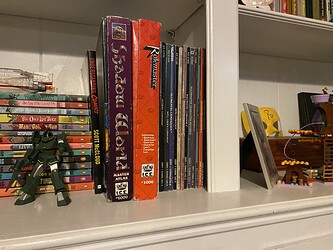 I still have a long shelf full of Rolemaster (much of it punched in 3-ring binders which I bought on trips to the US specifically for the purpose). Really ought to do something with it.

I still have a long shelf full of Rolemaster . . .

The new edition was apparently released last weekend at Dragonmeet.

There have been several editions released since I last played it. Mostly I played RM2 with a bit of Rolemaster Standard System, but by 1999 when RMFRP came out I’d largely shifted over to my house system. Now there don’t even appear to be any authors in common with the original ICE days.

Talking of unreliable recollections… I noticed Mike talking about a werewolf in “Rumble at the Tin Inn”. So I checked and confirmed my own recollection of that scenario; there is no werewolf. (There’s a werebear, though.)

I am really poor at writing down and recording sessions these days, which is a real shame since I have always relied on my memory for stories.
Having said that I lean heavily on players to explain the rules to me as the GM, frankly life’s too short to keep all of systems in my head.
I actually trust my players, partially because a GM should, but also because it’s about stories and they can change and adapt for me, even retrospectively.
However I never let on… I always raise an eyebrow and say ‘Really?’

MAR Barker was conservative in his world building, but the novels are actually quite rebellious.
Tékumel is not racist in the sense that we understand it, although it is prejudiced between cultures.
I suspect the world and novels predate the right wing sentiments.
Sadly he may have been an anti-Semite, and I mean anti-Jewish, but in other respects a conservative.
Sigh…