I’m feeling discouraged by my failure to get any material up here since about last May. Lots of reasons, one of which is a besetting doubt that the undertaking is worthwhile. I’m going to try drafting a new players’ brief instead. Here’s a draft cover, with very dodgy kerning. 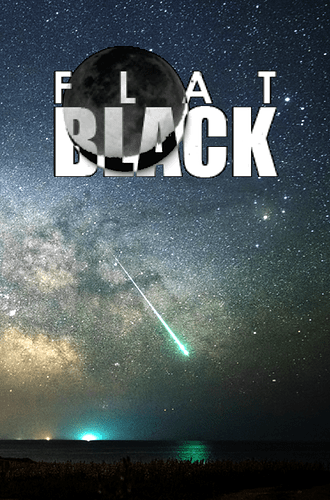 Looks good, but the words behind it will be what’s important for recruiting players.

Random observation: Blat can mean “to bleat”, “to make senseless noise”, or “to produce an overrich or overblown sound on a brass instrument such as a trumpet, trombone, or tuba”. Blat is also a loan word from Russian slang, meaning “connections, relationships, one’s social or business network”.

Flak is “the bursting shells fired from anti-aircraft guns”, while a flack is a press agent or publicist.

Here’s a first draft of the new introduction.

Flat Black is a setting for science fiction role-playing games. Within that gamut it is specialised for rationalised planetary romance, which is to say for adventures in the vein of Jack Vance’s Oikumene, Gaean Reach, and Alastor Cluster stories, Poul Anderson’s Polesotechnic League material, Ursula Le Guin’s Hainish cycle…. In the typical campaign or adventure the player characters will be comparatively cosmopolitan people who come for a purpose to an isolated planet that has a strange, quirky, or even bizarre society and culture. The planet’s social oddities will be at first an enigma and an obstacle to the PCs’ goals: to achieve their objective they will have to engage with the locals, learn about their customs, and figure out how to circumvent or even exploit them.

Flat Black is not space opera. Most adventures take place on planets, a few in orbital habitats; those that do occur in ships seldom involve commanding them in combat. The adventures usually involve conflict on a personal scale and for modest stakes, not the grand stakes, huge scale, and interstellar scope of space opera.

Flat Black is not hard SF. This is for SF adventure, not scientific idea stories; technical details will seldom be important. Apart form the faster-than-light Eichberger drive and the planet-wrecking CT bomb the technology is all pretty realistic (as far as I know), but that’s not a matter of hard SF purity: it’s so that the technology will be limited.

Flat Black is not soft SF. In one sense soft SF means sociological idea stories and implies realistic psychology and sociology, like hard SF of the soft sciences. Flat Black is for SF adventure, and it doesn’t matter if the bizarre societies are based on dodgy economics and sociology, so long as they aren’t unfathomable.

In the other sense “soft SF” implies transporters, replicators, force fields, body sleeving, psionics, time travel, “scanners”, “stunners” and so on, and is the opposite of “hard SF”. Flat Black omits those things, not because they are unrealistic but because they tend to overwhelm everything else. Flat Black should be about sneaking around, fighting, verbal fencing, and trying to figure out what the crazy locals are up to — not using a replicator and a transporter to circumvent difficulties.

Flat Black is not futurism. In no way is Flat Black meant to be a projection of trends or a prediction of developments. It’s not likely at all. It’s a set-up for planetary romance adventures.

Flat Black is not a utopia. The land of adventure is turbulent, uncomfortable, and unjust, leaving much for the player characters to do. In particular, the Imperials are not the good guys. They aren’t the bad guys either, but the Empire is is undemocratic and decidedly illiberal, harsh and high-handed, smug and culturally insensitive, and it is simply not interested in a lot of issues that the PCs might care about. It keeps the spaceways open and conquerors in their pens, but even PCs who work for the Empire won’t want to leave everything to the Empire.

Parties of PCs in Flat Black may be explorers, adventure journalists, charity workers, spies, clandestine operators, private effectuators, field researchers for Lonely Universe Tourist Guide, antiques dealers, art thieves, corporate troubleshooters, travelling salesfolk, mercenary cadre, revolutionary agitators, or even Imperial agents: whoever they are, where-ever they go, whatever their job it is to do, nothing ever goes smooth.

Quite. That is probably what has been missing so far.

On the other hand, in my current mood I’m pretty much resigned to the likelihood that Flat Black will never be of interest except to me, a few friends, and occasionally, for a short time, to the players in a scratch game or con game.

The Thing I Always Say that’s relevant to this situation is: many players don’t want to commit to reading more than a page or two. (If they get interested, they’ll read more.)

I very much commend the “typical campaign or adventure” bit; I might append “and they’ll leave once their purpose is accomplished”.

To me, the first and the last paragraphs are the key “what I’d want, as a potential player, to see” bits. The rest is nice to have, but it’s mostly negative; first and last tell me what Flat Black is.

I have always been blessed with players who were happy to read pages and page of tiny type.

I suppose I’d better get used to their loss.

To me, the first and the last paragraphs are the key “what I’d want, as a potential player, to see” bits. The rest is nice to have, but it’s mostly negative; first and last tell me what Flat Black is .

Flat Black is a setting for science fiction role-playing games. Within that gamut it is specialised for rationalised planetary romance. That is to say that Flat Black is designed for SF adventures stories of which the bulk consists of action on one or more exotic alien planets, and in which the characters must deal with the physical and social peculiarities of the exotic world to achieve their goals.

In the typical campaign or adventure the player characters will be comparatively cosmopolitan people who come for some purpose to an isolated planet that has a strange, quirky, or even bizarre society and culture. The planet’s oddities will be at first an enigma and an obstacle to the PCs. To achieve their goal the characters will have to engage with the locals, learn about their customs, and figure out how to circumvent or even exploit them.

When the adventure is over, or a posting is completed, PCs move on. The society is seldom either mended or broken by the PCs having “solved” it. But even when it is, duty or opportunity draw the party to another alien world, where inevitably they encounter another exotic society with another set of perverse features. In Flat Black there are a thousand exotic alien worlds occupied by humans, and every one is is, in its own way, damned peculiar.

Parties of PCs in Flat Black may be explorers, adventure journalists, charity workers, spies, clandestine operators, private effectuators, field researchers for Lonely Universe Tourist Guide, antiques dealers, art thieves, corporate troubleshooters, travelling salesfolk, mercenary cadre, revolutionary agitators, or even Imperial agents. Whoever they are, where-ever they go, whatever they have to do, nothing ever goes smooth.

Five things that Flat Black is not

Flat Black is not space opera. Adventures in Flat Black are about the actions of individual characters in adventurous encounters with exotic societies. They works best in a “narrow” scope of one planet at a time, for modest stakes, and at an individual scale. Flat Black is not suitable for naval action in space or for stories about interstellar conflict.

Flat Black is not hard SF. Adventures in Flat Black are action stories in a setting that is enabled by interstellar travel. They are thrillers, mysteries, capers, espionage and clandestine ops adventure. They are not hard-SF idea stories. They are not explorations of the human impact of imaginary technology.

Flat Black is not soft SF. The weird societies that PCs encounter in Flat Black have to make sense enough for the players to understand and manipulate them, eventually. But they don’t have to feature realistic sociology and economics: this is not hard SF of the “soft” sciences.

The technology in Flat Black lacks such fanciful things as force fields, stunners, teleportation, time travel, psionics, body sleeving and mind transfers. That isn’t because they’re unrealistic: it’s because trying to solve problems with a transporter and a holodeck distracts characters from adventurous action.

Flat Black is not futurism. Flat Black is designed to support Vancean adventure stories on exotic planets, not to be a plausible projection of the future. Nearly everyone speaks Standard for plot convenience, not because a universal language is inevitable.

As a quick brief, I’d find that pretty much ideal. (Now you just have to satisfy everybody else…) 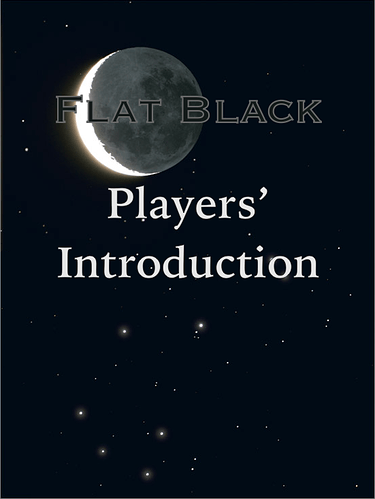 Looks good to me, even if I do have to witter a bit to post.

The only think that strikes me as less than ideal is that it doesn’t really imply SF. I mean, it could be the cover for a Werewolf game briefing.

Not sure how to do that effectively, though. Even if that large body is inhabited, it probably wouldn’t show up as such at that size; and those lights may be ships, but there’s no way to tell.

Maybe a bottom framing bit with a cratered lunar surface? Something very roughly like this? 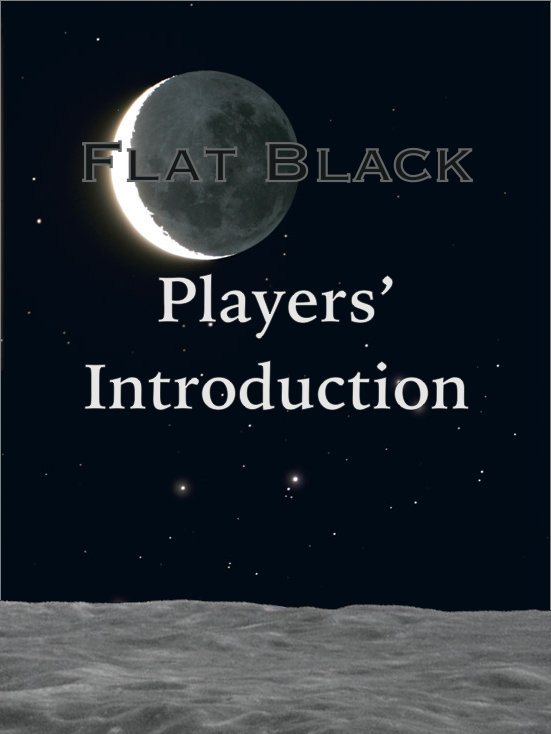 those lights may be ships, but there’s no way to tell.

Unless you recognise that they are the Pleiades!

I’m thinking of commissioning a template cover to serve as trade dress. Covers don’t sell books in electronic formats¹, so it would be okay to have a single distinctive image that I superimposed different titles on. The issue is that it will cost several hundred dollars to pay an artist, so I want to make sure that I commission the right thing.

Being artistically unimaginative I am tempted by something like this: 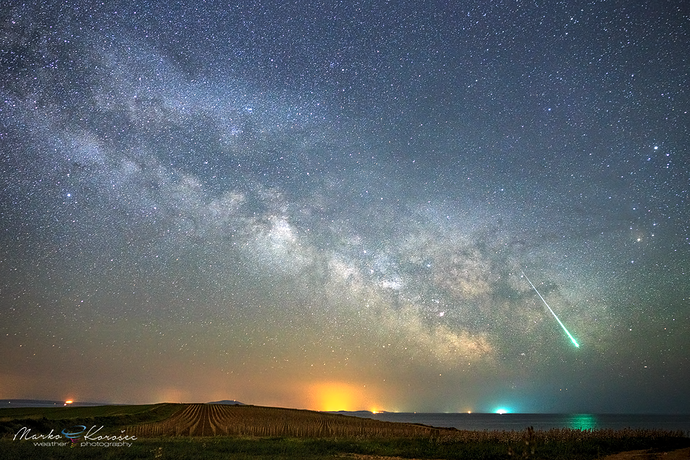 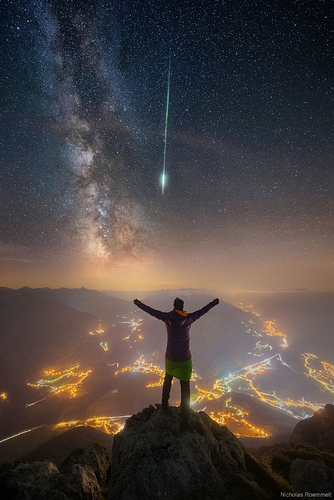 Where the meteors could suggest some sort of orbital weapon or spaceship operation.

Pretty, but they don’t really suggest the main point of interest of Flat Black, which is ethnological, not space-operatic. To really symbolise Flat Black I ought to have something that suggests the meeting of spacefarers with locals in exotic dress and attitudes. My current idea is Imperial Marines recruits failing completely to impress girls in a marketplace at the spaceport on Sehausie, with a shuttle rising in the background. The Imperial SHQ overhead would be 13.2 km long and at least 130 km away (much further if low to the horizon)….

¹ Besides, I am hardly in this to get rich. 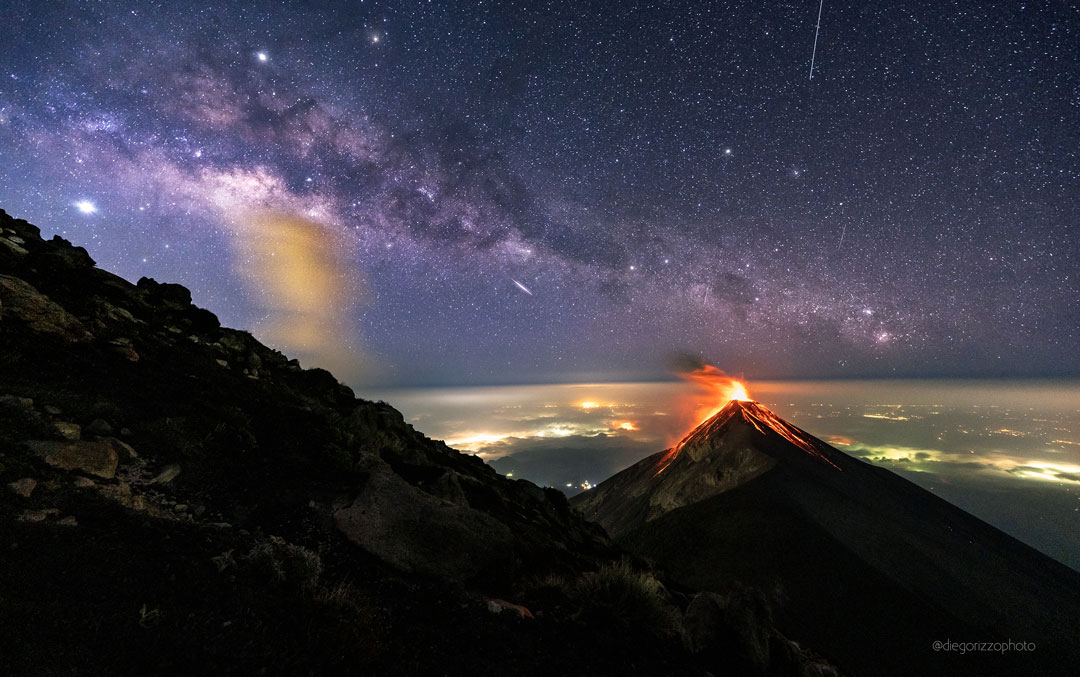 That’s pretty good. Presumably the Milky Way is going to look similar from all the colonised worlds?

It is. The Human Sphere is 350 light-years across, whereas the Galactic disk is ~3,000 light-years thick and Sol is only about 75–100 light-years Gnorth of it. Colonies in the Periphery in the direction of Sculptor are in the plane of the disk and their Milky Way might be 25% brighter. Colonies in the Fringe in the direction of Cetus are about half a scale-height further from the plane; their night skies might be 40% dimmer on the great circle parallel to the Galactic equator, with their Milky Way slightly more offset to the Gsouth. The Gnorthern sky would have fewer stars than the Gsouthern sky as seen from a planet in the Fringe in Coma Berenices, Canes Venatici, Boötes or thereabouts., but you would have to do a count to notice it.