They duplicated these video titles from last year, and threads can’t have dupicate titles, so I’ll just dump them here. Brian Boru – visually reminds me a lot of The King Is Dead, which unlike basically everyone else on the planet I didn’t love. I do like the look of the trick-losing powers; I wonder whether it may spread itself too thinly.

Bequest – feels a bit like Fantasy Realms with a more complex version of the drafting. Big box for a small game?

Birdwatcher – I don’t love the theme, but this looks well-integrated with it. That isn’t petty, it matters. On the other hand does the shared discard pile plus zoom lens action add up to enough interactivity? I’d like to try it.

Legendary some words Annihilation – not that I care about this thing, but I really think they should have picked someone who knew the base game!

Legendary more words 007 Expansion – indeed, this one works a little better, though it still comes over a bit as “I don’t really know what this is, I just got told to talk about it”.

Lizard Wizard – stock values? You know this is starting to sound really quite like the earlier Raccoon Tycoon. Then the spells kick in. I’d cetainly give this a try.

Skate: The Card Game – Gnarly cards? Maybe trying too hard, but it does sound as though there’s some thematic connection.

That’s Not Lemonade! – the deliberate “gross-out” theme doesn’t appeal, but it’s clearly marketable. I do like the deck-modification though.

Your Friend is Sad – feels like somebody else’s idea of fun. (But helping someone through bad feelings doesn’t seem to me like a subject for competition.)

Super Team – looks a lot more like a football game than that recent kickstarter, which admittedly was more about the team management side.

Artisans of Splendent Vale – You’re artisans yay, but also “adventurers” meh. I definitely like the wooden meeples, but the book approach pushes it towards single-use (and you’re writing your own stuff on the map and stickering the cards so you can’t even pass it on to someone else) which seems rather the opposite of eco-friendly. It’s a shame because there are some lovely things here.

Paint the Roses – a bit on the cutesy side for my taste, perhaps, though the gameplay looks interesting.

Décorum – feels a bit like Fog of Love, that sense of restricted communication with no reason.

Vagrantsong – all games are better with trains, though I don’t love the art style. Maybe something a bit more period? Looks promising.

Roll Camera! – still interested in this, but I definitely want to try before potentially buying. 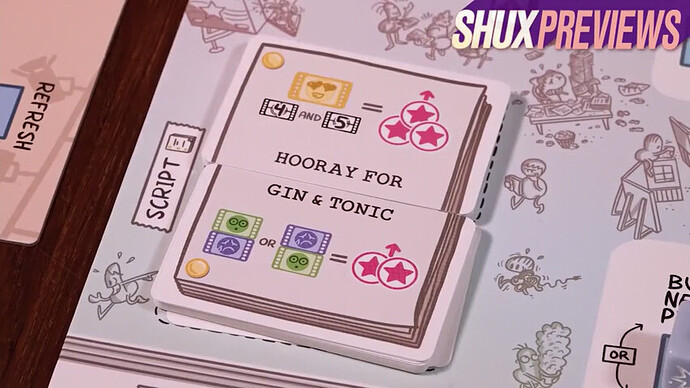 Earth Rising – …yeah, maybe? It raises “educational/worthy” flags for me and I suspect I might have trouble getting people to play it.

Brian Boru is the only game in these previews that I’ve had any kind of interest in. Though I’ve yet to get my copy of TKiD played, so I should probably try that first.

Also, Quinns’ (mis)pronunciation of Osprey continues to grate on me.

Artisans of Splendent Vale – You’re artisans yay, but also “adventurers” meh. I definitely like the wooden meeples, but the book approach pushes it towards single-use (and you’re writing your own stuff on the map and stickering the cards so you can’t even pass it on to someone else) which seems rather the opposite of eco-friendly. It’s a shame because there are some lovely things here

I backed this initially and then canceled my pledge after looking into it deeper. The art is just so beautiful and I thought a game about crafting (after I passed on Flamecraft orwhatsitcalled) with such diverse characters would be great. Then I looked closer and saw the whole book thing and it seemed this might be more reading of a scripted story than actual game.

When we play such games I always have to read whatever story there is. This is okay for the paragraph that starts off your Gloomhaven scenario. It gets boring after the 13th maptile you put down for 7th Continent and my voice just couldn‘t take Chronicles of Crime.

Roll Camera! – still interested in this, but I definitely want to try before potentially buying

There is an official scripted TTS module. I could offer a teaching session. As I own the game and have played it shouldn’t be too hard for me to do this

If anyone else is interested we can try and find a date. Caveat: I am completely „booked“ for this week-end and possibly the one after that, it would probably be best sometime Monday through Thursday something like 8pm UK Time / 9pm MET works best for me.

Ooh, I am interested in Brian Boru after seeing it in a couple of places. Will wait for full Reviews.

Brian Boru looks great! And Birdwatcher looked rather interesting as well, though not enough for me to back it.

Out of the co-ops, Artisans seems like an amazing experience, but I already have a couple of unfinished legacy games, which is what this essentially is from the description. Maybe if I ever finish those, I’d look into this.

Brian Boru, Earth Rising and Roll Camera were the stand-outs for me here.

Brian Boru looks great. Can’t wait to see the video treatment on that (it has to be coming). It’s one of the games where when I first see it I think “way too much going on here” but after the explanation it doesn’t feel that way at all. Probably not going to end up getting it because my wife usually hates area control, but damn I’d love to give it a try (might even consider using BGA or TTS if it becomes available on one of those).

In the co-op games I was actually most interested in Decorum - great aesthetics, unique theme, and looks like a fun puzzle to try and work out (and an opportunity to be over the top with the likes/dislikes).