I did end up opening Undertow and Splice and Dice, just to check them out. The spliced tyrant sheets have a faux-burned edge thing going that I thought was amusing. Then I took them out to make sure they were a pad of sheets and not like, neoprene I was gonna have to write on or something…and got soot all over my hands. Turns out the way they got that effect was by burning the edges.

(Guessing probably with a laser or something along those lines.)

Easiest and cheapest way to get a burned edge effect is to burn the edge!

As long as you don’t screw up and burn everything!

Talk about a failure. Who attempts a faux burnt effect by vrai burning it?

Oh noooo, just seen the Kickstarter you mentioned for A War of Whispers . There’s a deluxe version, a small “Dark Alliances” DLC, and the original version (2nd ed) if folks didn’t have it.

I really liked the look of this in reviews and might get it. Has anyone played it yet?

(Postage AND import tax will be on top, so leave a LOT of room for extra fees)

Over here are some TTS screenshots from the game three of us played last week.

The TTS version actually seems rather better than the physical one will be (since I’m not Deluxe-ing), and it has an automatic calculator for how many of which thing each empire owns.

I’ve managed to put a second little “piece of me” into Mothership via a design-an-objective contest. I did the same for the 2nd edition campaign. Next week will be an opportunity for another one, so I’m gonna do my best to get a third card in there. Granted competition wasn’t so hot this time around, but do you think I care one bit? No way.

Having previously backed Tortuga 1667, I got an email from Facade games about their new project: Bristol 1350.

Being from the titular city, I was immediately intrigued what part of Bristol’s history it could be touching on. 1350 is a bit early for the stuff Bristol’s famous for - slavery (we have enough games about that anyway), pirates, Victorian engineering …

Oh, it’s about the plague … 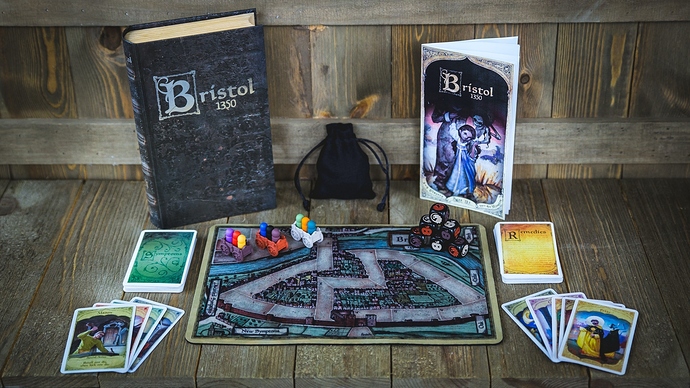 Be on the first cart out of town while avoiding players who are secretly infected with the plague. 20-40 minutes for 1-9 players.

Well, let’s at least see how Bristol plays into it. Hmmm, there aren’t any named places on the map, but it does say “The board is based on an original map from medieval Bristol …”

Let’s see if I can find anything by googling “medieval Bristol map” … Yep, the bottom of this map looks pretty damn similar to the game board. They even kept St Mary Redcliffe in the bottom left! And the layout of the fields on the bottom right. And the two boats at the top left. And the damn farm animals at the top right!

And, of course, some of the streets from the medieval map still exist.

So, the question is: do I fancy owning a game where I can kick someone out of a cart as we pass The Fleece (where I attended many gigs as a teen), wave at my brother-in-law as we pass the train station, before escaping towards a convenience store I briefly worked at?

(Also the price is pretty good - even with shipping - and their note about the unfortunate timing of the theme and how they’ll be donating to charity because of it is pretty nice.)

£62 for the base game, plus shipping? Ouch

Lol wait for retail then

The original version is available for under £50 in the UK (not that I’ve just checked!).

I really can’t believe what they’re charging here. It’d be $130-140 CAD shipped. Stupidly pricey for a guaranteed retail release, though I’m not sure if anything on offer is KS exclusive (cursory glance says no, or at least nothing to justify the cost and preorder).

It appears to me that they may have made a misstep: are Kemet fans statistically coincidental with miniatures/component-upgrade fans?

It seems to me that the pre-existing Kemet fans were fans despite components. My best guess: they’re hoping to lure in a new wave of fans, specifically those with the money and desire to pay for the luxury of premium components.

Does anyone see it as an upgrade though? The minis look like something from the 80s! The pyramids are a nice touch but the tops look a bit fiddly (and easy to lose?). The rest is a side step rather than improvement.

Bless Matagot. They try! But they seem to have no clue of what a modern audience expects.

It looks overwrought to me… but in my experience, there are a lot of Kickstarters that look overwrought (and overpriced) that people seem to take great joy in backing and decrying anybody who suggests it’s not a good value.

EDIT: That said, I certainly wouldn’t fault somebody who is a big fan of Matagot and want to be a little loose with their cash to encourage more output from Matagot along the same lines.

That Sphinx… yeah, not for me.

Quality costs money! I have no problem with charging more for decent components, but looks like they’ve cheapened themselves out by going for the $75 bracket. It’s that weird price point where it’s more than the standard retail game, but doesn’t have the components to justify it - it still looks like a $50 game to me. If they had pushed the boat out a bit maybe they could afford some wow factor?

Yes and no. I think we’re firmly in an era where a large-box game like Kemet is more likely to be $75 than $60. But I do agree; I feel like they have squandered an opportunity to stand out.

I don’t think I’ll bother. I’m perfectly content with existing Kemet, so my only question was whether they were so dramatically reworking or expanding the game that I would need the new edition to feel complete. But the changes they describe don’t seem particularly dramatic and some of them were already in Ta-Seti. (Now, granted, I don’t own Ta-Seti, but…also I haven’t actually played Kemet at home in years so does it even make sense? I’m not sure it does.)

Was looking forward to this one but at the moment I don’t know it’s just not selling itself to me. Having never played kemet it seems to me to be going for the “more stuff” and rid of the things fans didn’t like.

Streamlined gets handed about a few times but they’ve also added more stuff which (although I may be completely wrong) seems counterintuitive to streamlining.

Also having rewatched both reviews from the boys “still only one wine list” seems crazy. Here’s hoping the slave listed under white power isn’t still a thing.