The computer player gets all the luck

Recently I’ve been playing a lot of Cribbage against my computer. In the past I’ve only played against people, and I’ve noticed something…

Without a human opponent to express outrage when I get an incredibly lucky hand, it doesn’t really feel like I’m being fortunate – I will realise I was lucky, and I’m happy about it, but at the same time I’m quite blasé about the luck itself. Conversely, when the computer gets incredibly lucky, it can be infuriating because in my brain the luck feels imbalanced, and I think that’s entirely because my sense of frustration at the computer’s good fortune is not balanced by an equal appreciation of my own good fortunes.

The end result is that, even ignoring the absence of the other social aspects, I’m simply not enjoying the game the way I do when I play with a person, which is a shame.

Maybe just being more aware of it will help, but perhaps it’s just a bad idea for me to play games against a machine when there is an element of luck which is both significant and overt…

Do others find similarly?

Yeah, losing against the computer sucks, unless you look at it as a learning aid.

Like, I don’t mind losing against a Go program, because I have a lot to learn and I know the computer will always be better.

But losing against a dumb-as-rocks boardgame AI, only or primarily because of bad luck, is deeply unsatisfying. Of course, winning isn’t much better.

A thing one does quite often in Rallyman GT is double- or triple-brake at the start of one’s turn to get round a corner, then accelerate away. The chance of this producing an immediate loss of control (and thus end of turn) is 1.9% for double brake, 7.4% for triple.

When I double-brake on BGA and LoC, it feels unfair in a way it doesn’t when I have actual dice at the table. Why is this happening so often? But I’ve played probably 200 games of this on BGA, each of which might have 20-odd turns, so if anything I haven’t had enough LoCs from doing it…

But losing against a dumb-as-rocks boardgame AI

What about losing to an actual box of rocks? 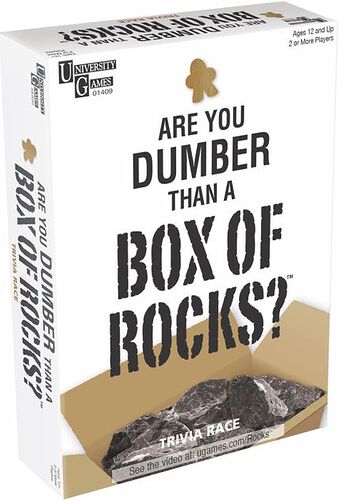 Are You Dumber Than a Box of Rocks?

Failure...self doubt...existential despair: This best sums up your feelings in the immediate aftermath of playing "Are You Dumber Than a Box of Rocks". Why? Read on, professor... You have three chances to beat the Box of Rocks at trivia. Three...

I’ve kept playing my computer at Crib, but when playing lots of games in a session I’ve often found that I lose more than I win – often starting well, but then losing several in succession and ending up behind.

I just finished my longest series of games (19) where I’d been behind for a long time but had then won several in a row and finally caught up at 8 games each. I thought I had the next game in the bag to take the lead, but fell infuriatingly short at the finish line, making only 4 of the 6 points I needed for a win with my final hand; but I then evened it up again at 9 games each, and obviously couldn’t stop there…

I’ve skunked the computer on several occasions, but doing so in such a resounding fashion to take the lead in a long series… well, I decided there was nowhere to go but downhill from there, so I sensibly ended the series with myself the undisputed victor : ) (The nice thing about playing the computer is that they don’t dispute these things ; )

(Edit: Eagle-eyed crib players will have questioned my final scoring, as I see I’d written 7,8,8,8,9 instead of 7,8,8,9,9, thus apparently short-changing myself an extra point! Now fixed : )