There are of course also the lists of recommended games and the children’s games.

Instant response in my mind Hiphopopotamus

I was only keen on MicroMacro Crime City, but now, I don’t mind trying the other SDJ. I always had a good time with them, despite snubs from hobbyist gamers.

I have had my eye on the Robin Hood game. I saw a review. It is by the same designer as Legends of Andor which I didn’t enjoy that much. But the review I saw of Robin Hood suggests there might be something there for me to try at least. I don’t quite remember what I was but it is definitely on my list to pick up from FLGS…

I will get to try MicroMacro when our friends are done with their copy.

I only heard about Zombie Teenz from one of the Dice Tower top 10 things. I think it is a kid friendly coop legacy thing… with zombies. I think it made Tom’s list of Top 10 Legacy games.

I would be keen to try Lost Ruins on BGA… have been for a while (as I wait for my Dune Imperium preorder to make it here).

Our friends have Paleo so I will surely get to try that one at some point. They’ve been enjoying it but found it easier with more players.

Well and I am still surprised that Fantasy Realms is a really new game and Red Rising already seems to have ripped off the central mechanic. I’d love to try that at some time to see how it compares to Red Rising.

I’m curious about MicroMacro’s nomination. The themes are VERY much non-family friendly, so will they want to put the big badge on the box?? I certainly wouldn’t feel comfortable giving it to a family without a whole heaps of caveats and questions to make sure they know what they’re getting into. So are you okay with your 10 year old seeing someone throw themselves off a building because of a break up?

The nomination seems more like a ‘special mention’ than real competitor. And if it wins… Yeesh!

The themes are VERY much non-family friendly,

I am not sure that the Spiel des Jahres people view it that way or they haven’t checked carefully, the game itself says 10+ and our friends gave this to their 12 year old daughter for Easter and they’ve been playing this a lot. I heard no complaints and I know the mom checks every book her daughter reads right now and is quite protective in general.

The themes are VERY much non-family friendly

I’ve heard of a number of reviewers being surprised by this so it’s clearly not part of the general perception of the game. And the distorted animal-shapes make it look like something for kids.

I certainly have played a veeeeery similar game

It sounds exactly like 21. It is not cool to take a folk game and try to commodify it without adding something substantial.

It’s weird. I’m fine with kids watching horror films and GTA, but a game that shows people reacting in extreme ways to something petty is more

to me. “Upset? Just kill yourself or self harm!” isn’t something I’d feel comfortable showing to a child regardless of how it’s framed.

I was a child with suicidal ideations from the age of maybe 8 or 9, which reached its peak at 12 or 13, so I guess I relate to kids getting on that track. I think there’s a big difference between the violence of horror films which is largely preparation for external forces versus showing violence of how an individual would respond to something.

I’m sure with young kids it would go over their head like the death of Mufasa. But for that middling age of 8-13, when cause and effect are starting to be understood, I’d feel uneasy with passing the game to a family with no preface. At the very least for taking responsibility for what other people’s kids see!

But for that middling age of 8-13, when cause and effect are starting to be understood, I’d feel uneasy with passing the game to a family with no preface.

Our friends are playing with their daughter so I am assuming that mitigates the issue somewhat.

Overall, this makes for two nominees that earned some criticism in the sensitivity department from reviewers (Paleo is the other one) and I am wondering if maybe there is a larger issue in the German game industry that needs to be addressed? One always hopes that the adressing will happen internally before external pressures force it…

Having played the case in question I felt it was weird. Most cases ended with a ah! moment as you excitedly realise how or why something happened. Where as that case ended with a very downbeat oh!

I’m fine with kids watching horror films and GTA, but a game that shows people reacting in extreme ways to something petty is more

I’d rather kids did not get exposed to Horror movies or GTA at all. The age coding is there for a reason in those. A few years ago I found out friends had their kids playing GTAIII or IV at 13. I think it is very wrong. Specially where parents that allow this influence their kids and they put peer pressure on yours.

It is difficult to get to grips with issues like this, but I think many parents should take more responsibility on what they do around age limits for media.

The Robin Hood game and Switch and signal have my eyeball.

I must admit the micromacro looks kind of okay to me but not really a game I’d want to spend time with.

According to a BGG news article today, a standalone expansion to MicroMacro is coming that will include markings to indicate which cases are family friendly and which maybe not and another box is in the works that is aimed specifically at kids. Doesn’t do much for this first box and slapping the Spiel sticker on it, getting it in homes everywhere, and people perhaps being in for a bit of a shock, but some potential for the series overall to meet all needs perhaps. 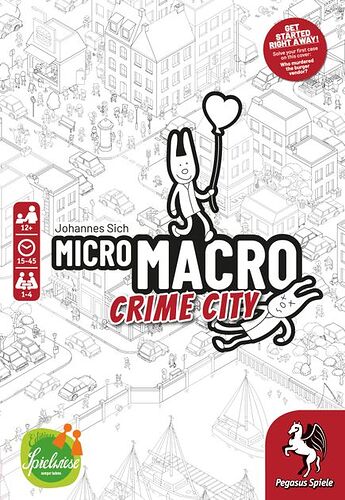 Return to MicroMacro: Crime City for a Full House of Cases | BoardGameGeek News

I found out tonight that apparently the second printing here in Germany already has the changes you mentioned.
At least the publishers are taking the criticism and doing something to improve.

Presumably Fantasy Realms has only just been translated into German?! because otherwise I’m confused about how it could be included given that it’s been around for long enough to have been cited as a major influence for Stonemeier’s Red Rising.

yes translation date counts. this is how I can nominate Brass Birmingham for Deutscher Spielepreis this year