Some UI questions about Antiquity, all input welcome!

The Vassal module is coming along nicely, but I’m getting to the point of some finicky UI issues, and I’d love to have some opinions to direct my work.

First, some screenshots so you can see where I’m at: 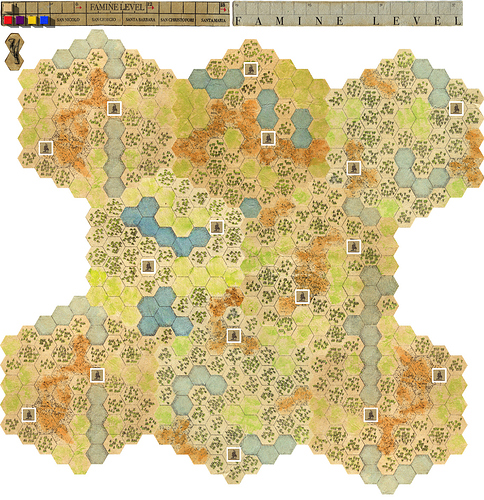 These are the two windows you’ll be looking at most. (Got to give props to that Splotter aesthetic: deliberately making your game look misprinted with saturation errors, with battered cardboard art, is pretty ballsy.)

On the main map, you can drag and drop men, but mostly you right-click then select “place wood” or “harvest” or the like to get things done. Only men and cities actually need to be manually dragged.

On the player board, everything is drag and drop and rotate.

So, first question is, how to store resources?

At the moment, “harvest” will look for an empty spot in the harvest area (invisibly assigned values from 0-15), and send the token there. I’m also thinking of adding a “storage” area below the harvest area in which there will be space for 10 piles of counters, with a numerical counter next to each pile to show how many resources are in it. I can’t just make 0-39 harvest locations, because believe it or not, calculating which of 40 locations are empty to send a piece to breaks Vassal(!) I like having the harvested tokens laid out though - it makes them more accessible than in stacks.

Is a division between harvest and storage useful? Are piles better than splayed out tokens? Note that tokens in a pile have to be removed from the pile before they can be “discarded”. Also note that storing resources “on” storage buildings doesn’t really work, because Christofori gets overloaded, and Barbara makes moving them around a pain.

I could assign tiles, but make it clear players are not stuck with those assignments, or I could stick to the rules and just leave initial cities on the player boards as illustrated above.

The last major UI wrinkle is the city build phase, which is simultaneous and hidden. Right now I have it set up so that if a player clicks “start build phase”, all the buildings, resources, and men on each player window are sent to the same coordinates on private player windows. Once every active player clicks a “commit” button, all the buildings, resources, and men are sent back to their public windows. Does this sound OK? It feels a bit clumsy, but seems to work.

Nothing to add or counter on your points. They sound good.

Another question is, should I randomly assign starting tiles to players?

Closer to the rules, the better.

EDIT: How will you facilitate inter-player trading?

EDIT: How will you facilitate inter-player trading?

Trivially. I assume you mean during the private build phase. Players make a deal by any means of communication, then resources can be dragged from private windows and dropped into public windows.

Another question is, should I randomly assign starting tiles to players?

Closer to the rules, the better.

Normally I would agree without hesitation. It’s just that physically assigning starting tiles would be tricky to do, and require some extra components, and the player order is virtually guaranteed to change before it makes any difference, so giving the “last” player first pick of tile isn’t a balancing thing, it’s purely an advantage, and a way to induce analysis paralysis. So, are the rules as written best, or just a compromise because randomising is awkward?

I do still kind of agree though. Giving the players the choice is more Splotter-esque, and if players want to randomly assign starting tiles, perhaps I should let them do it by themselves.

The module looks great so far! Obviously vastly better than the BGC implementation.

I have never used Vassal so I have no idea as to what it can do and how hard different things are to implement. But to give you some input regarding your questions:

In regards to the stack vs splayed: stack is better for user experience.

I still like splayed resources, but I can understand the desire for stacks. Unlike the physical game though, a stack looks no different from a single piece, there’s just a number next to it. I think I will stick with “both” for now. Splayed harvest, and stacks for players to move resources to if they want to. (Stacks are much much easier to implement, btw, I’m doing a silly amount of work to get splaying working.)

As for Vassal Vs Boardgamecore, it can’t be made strictly better.

Things it will do better:

Allow trades between players
Allow simultaneous play when turn order doesn’t really matter
Use official art
Have an undo function (as well as just generally allowing players to do anything they like with the pieces - for example take backs, corrections, experiments)
Not require a screen refresh for every action
Better visual and log feedback for everything going on

Things it will do worse:

Not on mobile - needs a PC
No rule enforcement
Probably no zone of control indicators
Placing all the pieces for a woodcutter, for example, will probably require #hexes x 2 clicks instead of one (right-click, select “place wood” gets you a one grass tile and one wood resource in the right place, then repeat for each other hex)
Require more dragging of pieces (this might be a plus for some)

I just realized the game probably needs a more comprehensive phase tracking system, so real-time players know what is currently expected of them. I’ll expand the phase thing so that every phase has a “commit” button to advance when all players commit, and every phase except city building has a “skip to next phase” button for when waiting for every player to commit is pointless.

After harvesting a ton of resources: 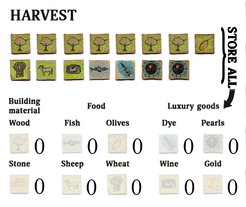 After clicking STORE ALL: 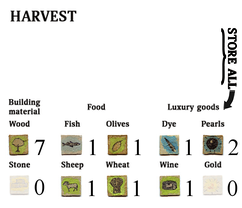 Not entirely happy with the stacks, because you have to drag resources off the stack one-by-one to discard them. But stacks were requested, so stacks you got, in the least finicky way I can manage.

There is no way to limit storage to what you can store. Players will have to keep an eye on that themselves.

@mr.ister, actually, if you could provide a high quality scan of the player aid/mat, that would be very helpful. I was going to design my own, but I think the real thing would suffice.

I don’t know about high quality but I’ll try! Do you need just the round structure or do you want the entire player aid included the building powers, resource table etc?

The whole thing, thanks.