If you look closely, I think you can see bits of Tom’s brain melting out of his ears in the heat. The boy was loopy! And entertaining as ever.

The south of England hit 39/40C last week, so it’s possible he’s entirely serious about how hot it is.

I had no doubt of that.

Ah, the cheeky yellow ones. I will only ever see this: 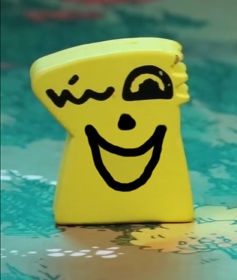 I must admit I have only used the otters from all the expansions, and keeping away from the fact that Tom is wrong about the Vagabond and forgot all about the Exiles and Partisans new deck, which he merely names on subtitles at the end, I must admit I enjoyed this.

Somehow I was always under the impression that the Riverfolk expansion factions were worse than the Underworld ones, but I have never played them myself, although in gameplays I have seen they have always been very attractive, specially the Crows, and the Duchy seems very efficient. I have the Marauder expansion and the Hirelings, but I am yet to play them, and recently got the new Vagabonds as well, so much to play, and so few people to play with…

At least it is good to see how the latest two (Hirelings and Marauder) can improve the 2P version, which is how I am more likely to play, so I am glad I invested in the KS.

I was always under the impression that the Riverfolk expansion factions were worse than the Underworld ones,

The lizard cult are my absolute favourite

They are weird, though. In that, I agree with Tom.

How do you guys find the free “patch” with the Lizards and the others?

Cries a few oily clockwork tears: I have yet to play Root other than coop or solo or losing against the app