Podcast #193 - A Big Chat About Obsession

In this aristocratic episode of the Shut Up & Sit Down Podcast, Tom and Quinns are talking about just one game - Obsession! We’re chatting about the second edition of this cult hit alongside its Upstairs, Downstairs and Wessex expansions. Enjoy!

Have a great weekend, everybody! 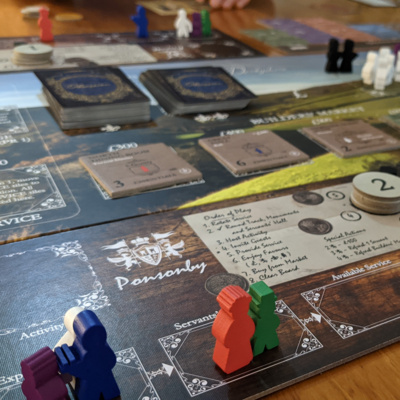 In this aristocratic episode of the Shut Up & Sit Down Podcast, Tom and Quinns are talking about just one game - Obsession! We’re chatting about the second edition of this cult hit alongside its Upstairs, Downstairs and Wessex expansions....

I mean, I realise Obsession isn’t set at an exact date and the boundaries between periods are obviously sloppy, but going by the podcast these are all getting mulched together.

(I preferred Tom’s in-person sting near the end to the pre-recorded ones.)

It seemed like Quinn’s went into the silly story game with one attitude that he liked and then hated the game when he started taking it serious. Sort of like complaining the points values in Arabian nights were unbalanced - while Tom was chilled about strategy and had a better time with it.

I’ve got this game (without the expansion) and I think it’s great.

You need to play it once so that you know how the rounds go (some towards the end are unique and a REALLY big spending opportunity) but once you’ve done that, it’s a very rewarding game.

You can get blocked by other players taking the building tile you wanted or by the limited servant pool, but apart from that a lot of it can be planned and is reliable. I can tell what Quinns is talking about, but “what the Fairchilds want this season” has about 4 variants you can use to reduce the randomness / give you more information.

I think the £1,500 situation that happened is SUPER rare (and only possible with the expansion), and as they admit there is a load of mitigation that you can use (but they didn’t). Luck is part of the theme (and the entire game is soaked in theme). If you get good luck, that also builds the story.

I haven’t had the bad feeling of losing an entire round to a ‘rest’ action while your opponent doesn’t, because I often play it solo, which might affect my view of it. And yes, there IS a co-operative mode too. It was so difficult to get hold of, I’m holding onto it