Places on the internet to look for players

Hi everyone,
I moved to a new town (and country) and I would like to look for new RPG friends, to have some contacts for that glorious day when playing in person is allowed again around here.

I have posted something on reddit (r/lfg/ , r/lfgmisc/ , r/LFG_Europe and r/DNDNL) managing to find a few potentially interested, I have posted on RPG.net, and on a local meetup.com group, but I wonder if there are other websites that could work for this. I found a few others, but they are other specific for the US or for DnD, or both.

Do you have any experience with this and any advice? Thanks!

My experience is that this is much easier if you’re specific about what you want to play, where and when. Using a forum that’s specific to the kind of game you’re interested in helps. Offering to run something helps a lot.

Presumably, you’re currently looking to play online in some way?

Well, back in Berlin I hsted this regular one shot night in which we played a new game almost every time with whoever was interested and available, and that’s what I’m trying to recreate here in Utrecht.
You have a good point with specific forums there, but being adamantly non specific about the game I want to play is my entire jam

I do like a certain style of play, but I tend to change game very, very often, also for series/campaigns.

No, I am not really looking to play online right now, I have my old group for that and a trusty public discord server. At the moment I am really looking for getting in touch with people interested indie RPGs and story games for future in person games.

You have some problems there:

Somebody unfamiliar showing up, wanting to form a group for playing in an unfamiliar style, at some ill-defined future time, is thus liable to be ignored. The odds of payback on engaging with them look quite poor.

There are different styles of play, different people looking for different experiences, and game designed for all of these audiences, including a wealth of games that are designed for one shots.
I am fully aware I play stuff that is a niche of niche hobby, and that looking for players for that can be daunting (putting together my old group was a long process), but I succeed in the past - and enjoyed the results immensely- and I’ll see if I can do it again this time around.

I think the trick will be to lay it out explicitly: lots of different short games in different systems. So players who maybe don’t want to commit to a new regular session, but would be happy to drop in from time to time, may be interested in that.

Maybe worth looking at rpggeek (part of boardgamegeek); it doesn’t have region-specific fora the way BGG does but I think people who are active there tend not to overlap much with other RPG places.

Thanks. Yes, in the places where I posted I have a description stating what I want to do and what I look in a game.

I’ll give RPGgeek a shot, I had completely forgotten about that!

Roll20.net is the place to go. There are lots of games to search for though the most popular is DnD 5e.
You’ll be able to easily find a group there.

Do you have any experience with this and any advice?

I tried using http://nearbygamers.com a few years ago, and had little success because I live in a roleplaying desert. I don’t know how much activity there is there now, but it might be worth your finding your area on the map and seeing whether there is a swarm of markers.

I’m not even in much of a desert, but all I met on nearbygamers were D&Ders who had no interest in moving beyond the dungeon. Which is clearly fine for them, but they weren’t what I was looking for, and vice versa.

Speaking of getting swamped by dungeon-crawling D&D when you are only looking for something else, there is a Discord server (called “Aus RPG”) for finding and recruiting players of any RPG except Pathfinder and the latest edition of D&D, in Australia, New Zealand, and the corresponding time zones. The organisers say they have nothing against D&D, wish D&Ders all good fortune, but want a recruiting and discussion space that isn’t so flooded with D&D posts that nothing else is easy to find.

Perhaps there is something similar for the Netherlands. I wouldn’t know how to find it if there were.

I tried advertising on Aus RPG (the Discord server I mentioned above) and found it surprising effective.

I wanted to find an extra two or three players for a game to be played over the Internet on Saturday nights, using an obscure old RPG and and in an obscure subgenre of SF, and starting in mid-to-late January. So I expected my ad to languish for weeks attracting few replies. And so I didn’t mind when the ad dropped, but posted it as 23:22 on the 23rd of December. Evidently I write better ad copy than I thought, because I got a very enthusiastic reply (“Fuck yeah, I’m in”) at 23:28. I had three keen players by 08:30. Within 24 hours I also had five people saying that they wanted to play but were sadly unable to do so on Saturday nights.

If there are not similar Discord channels for other time-zones, someone ought to set them up quick-smart.

For online games via Discord, if anyone is into small press RPGs/storygames I cannot recommend “Online RPG Players” enough, both for the games they play and the “table culture” they cultivate. One of the moderators is a friend of mine and in my old RPG group, so I might be biassed…

For the situation I was describing above, I think the challenge is the in person part. Never mind that the terrible timing -we are again in lock down now around here- but this also limits the chances of finding people wanting to try something a bit different, in particular in smaller towns.
Still, I have some contacts, nobody has run away when I told them that I regard Good Society as one of my best games, when I told them I want to play Kaleidoscope again, or when I proposed For the Queen as our first game. There’s hope, I just need to wait for things with the pandemic to get better.

Speaking of getting swamped by dungeon-crawling D&D when you are only looking for something else, there is a Discord server (called “Aus RPG”) for finding and recruiting players of any RPG except Pathfinder and the latest edition of D&D, in Australia, New Zealand, and the corresponding time zones. The organisers say they have nothing against D&D, wish D&Ders all good fortune, but want a recruiting and discussion space that isn’t so flooded with D&D posts that nothing else is easy to find.

For the convenience of anyone who wants to check out AUS RPG, here is a link: 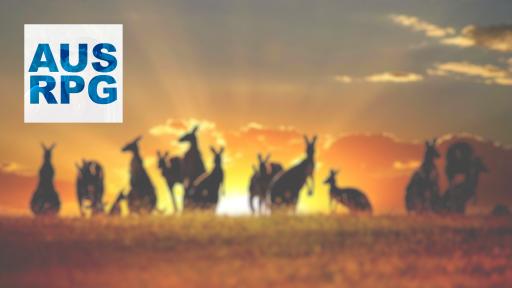 AUS RPG is a community dedicated to those smaller RPG titles that get lost in the noise of bigger ones. | 694 members