Lexicon - The game where you only post once (Round 1)

A Lexicon game is a storytelling game designed specifically designed to be as collaborative and accessible as possible.

A game set on a space station would involve you;

Writing 100-200 words describing an event, location or character. In the course of your writing you may mention Space Commander Thrall or the Mess room.

After the initial posts are written, another round begins, where players expand an element of the world.* Someone might want to flesh out Commander Thrall in their own 100 words. They might then include references to the Sheliak War. the cycle can then be repeated.*

No one is compelled to stay between rounds, you’re just writing what you want and anyone can pop in and write their own article whenever the urge takes them. 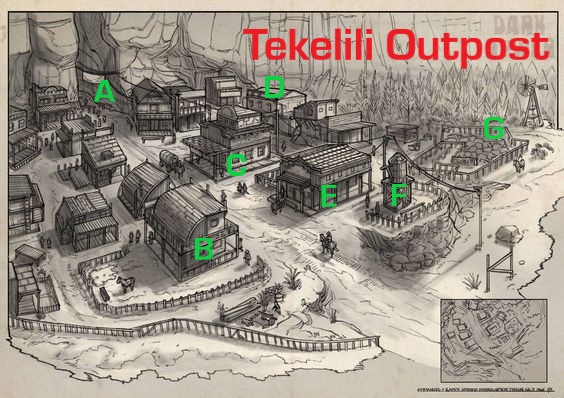 Welcome to Tekelili Outpost, a frontier town on a newly discovered world.

The fresh smell of a new day fills the air. A sort of pungent smell that makes you retch and gag if you’re not used to it. If you grow up with it, you can skip that stage, and move straight onto stinking of shit for your whole life.

After a morning toiling in the hot suns I can’t wait to get my hands on something cool. Condensation running down the side. I close my eyes and tilt my head back. The bar won’t be open for another four hours at least. I head back upstairs. So many rooms, but since Zach left us I only use two of them. From up here I have a good view of the main street. As soon as the local law rolls down it, I can start thinking about leaving for that bar. That’s me for the day, then.

The double doors of the saloon burst open and a young man stumbles through, dripping in sweat, bleeding from a cut above his eye, followed by a ravenous horde of bar patrons. Laughing and jeering, they throw empty beer bottles, some rotted fruit, a live rodent at his feet, and watch as he swerves in and out of the falling debris. He crashes into an unsuspecting passerby, and they immediately join the swarm, pelting him with handfuls of grain and barley. The crowd chases him down the main street and straight out of town, only letting him escape when they are all out of things to throw at him. Near the edge of town, an old woman sits on a fence post and watches the commotion from under her slightly oversized hat.

Where is he? And where the hell is Mary? Where are my fucking keys

How have I over slept again? I can’t believe this

Fuck it’s hot, what time is it?

Time for coffee? It’s that or a wash and a shave…

Why today, of all days?

Where the hell is Mary?

What the fuck is that smell? God, why is so hot?

Doc pushed back his hat and stared upwards to the legs waving in the air above him. As he watched, one leg slowly drifted downwards and the attached waggling foot gained purchase on a rung of the access ladder. The first leg was briefly joined by a second before both were released allowing the owner to tip once again through the access hatch of the Water Tower. It was not until both legs had reached their highest point that Doc call out ‘Mackenzie what the hell are you doing?”

Both legs twitched violently and swung dangerously upwards only to be stopped by a hand grabbing the rim of the access hatch. To the sound of cursing Mackenzie pulled himself fully into view and stared down with suppressed annoyance.

“There’s something blocking the tank outlet and it’s interfering with the flow. I was trying to get it out.”

“Oh” said Doc nodding “Well I guess someone has to do this stuff now that Zack’s not here.’

‘Look Doc, could you do me a favour? If you bang on the down pipe while I work from this end we might just get it free.”

As the top half of Mackenzie disappeared again, Doc moved to the pipe and began to slap it rhythmically with both hands. Within a minute there was a shout of triumph and Mac pulled himself back into the sunlight.

"Damnedest thing Doc, it was blocked by this package. Let’s get to my workshop and see what’s inside!”

Sally sighs as she attaches the last set of plugs to the windmill. She tries to ignore the figure being run out of town.

She always knew being a vet out on the frontier worlds was going to be tough, but she didn’t know the vocabulary would be so blunt.

The atmos pack hums into life. She knows it’s nothing compared to the oxygen stacks at the poles, but this world isn’t ready for cattle. She sees them wheezing in the new holding pen and feels a pang of guilt she can’t do more. Hopefully it will tweak the local environment enough to give them the time to acclimatise…

Jarvis’ barber shop does pretty well. Folks get shaved, hair fits under hats, and everyone enjoys the improvised confessional of his hydraulic chair.

But it still astounds him that people don’t ask why the building is so big, while the shop only takes up the front third of it…

If only they knew. If only.

Progress digging back there has been slower this past couple weeks, it’s just so hot now. But the tunnels are safe, the cavern is complete, and soon he can begin. The carvings will make sense and work on the machine can commence, and finally Jarvis can get some gosh-darned sleep!

(I have also update the image to spell Tekelili correctly. If only there was somewhere I could have checked the spelling…)

Location A.
The wind tugs at the warning banner strung up at the entrance to the canyons.
Danger - Canyon Crawlers. Enter at your own risk.
The scarers strung up just inside the canyon serves to keep the outpost safe from roaming Crawlers, but any party braving the rocky labyrinth has to keep their wits about them. Folk ain’t too sure what draws them out of their hiding places, but there’s a thriving black market in portable scarers and foul smelling ungents ‘garaunteed’ to keep a person safe from Crawlers. Some swear the best recourse is old fashioned firepower. Regardless, the Crawlers are an ever present threat.

Coopers crew went into the network only two days ago, and are well overdue. Fair to assume that they’ve fallen foul of Crawlers, or maybe something else. There’s plenty other odd things spoken about in hushed tones from those that come back out of the canyons…

I hope to see you all in…