So we played our second “game” of Innovation the other night and instead of my partner conceding the game after a few turns, we switched seats and I had to continue playing with my partner’s cards…

I had opened the game with “Clothing” on turn one and used the dogma directly to play another card and scored. I repeated this the next turn and the one after that to dominate age 1 in turn 4. Obviously, I also had all the colors on the table by then. 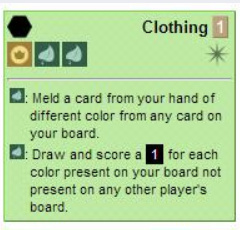 I cannot remember which card he played, I think it might have been Oars or Archery. Whatever it was, he didn’t use the dogma. We then switched places and he proceeded to use my setup to win by the time we hit age 5. I made a few stupid mistakes later in the game (f.e. by not using the dogma on City States to decimate his huge number of cards with towers) and thus helped him along. It seemed to him like the win was inevitable from my initial setup with the Clothing card. I don’t want to believe that.

What are some good strategies to catch up or decimate another player who is in the lead?
Do we need to memorize the cards to play the game well?
How important is it to keep track of my opponents cards? Or is it more important to match his symbols to profit from the dogmas he uses?

Are there any easily made rules mistakes we have to avoid?

I’m interested in this thread. I think we’ve played about 10 times at different player counts. We have the Iello version rather than Asmadi. I think the cards are the same. Although I’ve never seen the word ‘meld’. Is that a German to English translation?

At the level we’re at Coal and Pirate Code (both Age 5 cards) are very powerful.

Looking at your example, a simple counter is to just get as many colours out in your tableau as possible - at least matching the Clothing player.

I, too, have the Iello version, the word meld must be from the Asmadi version. I took the screenshot from a BGG thread on the cards. I kind of assume the experts know all the cards but I wanted to make sure I didn’t mix up something.

I’m curious as to why you think the Clothing lead was dominant. It’s a good card, sure, but all it is is a limited meld action with the potential to score about 5 points, maybe. There are double actions like “draw and meld”, “meld two”, and “draw two” that can get you started faster. You did of course have to be lucky that you kept drawing cards of different colours too.

FWIW, Oars got a buff in 3rd edition (one of very few cards to do so). If the dogma succeeds, you repeat it.

To have won in Age 5, I guess you got all 5 standard achievements and 1 special achievement. That’s 5 “null” actions you took that your opponent didn’t have to, and all the actions to get a score of 25+. That leaves some scope for catching up. That said, in my last game I lost because I spent all my time building a massive “unbeatable” icon advantage while my opponent got lucky with consistent scoring and got all 6 achievements! So yeah, can happen. I was one action away from decimating his score though…

I’m curious as to why you think the Clothing lead was dominant. It’s a good card, sure, but all it is is a limited meld action with the potential to score about 5 points, maybe.

I didn’t think it was a particularly strong start, my partner did…
I got lucky in drawing different colors several times.

I think we made some mistakes with scoring. To dominate an age one needs to have a score 5 times that age, right? Do you have to remove cards that you used for scoring? My mistake was letting my partner score several 4s at some point and that led. As we switched seats I had to give up the position I understood for an unfamiliar one and I scrambled to keep up with his/my lead.

Then I made a rules mistake with splaying cards in the wrong direction and to make up for the advantage I had for a turn or two, I didn’t correct myself when I saw I was making a major strategy blunder–of course had I realized it would end the game within two turns…

You do not remove score cards when you take achievements. A common mistake is to forget the need for a top card equal to or greater than the achievement.

I think except for his final domination he had all the prerequisites…
my mistake letting him draw all those cards first and then score them.

So when a dogma says “Draw a 2” and there are no more cards in the age 2 stack, can he still draw cards that way and use the next higher stack like I would do for a draw action?

Yes, that applies to all draw actions.