Has your 7 year old been taking lessons from my cat?

He will steal the bite of food off your fork, and get the zoomies, running in circles around the house, eat questionable things and bite n scratch, and loves scritches, salmon and sitting on the heater when it’s blasting.
…
My son, the cat.
We’ve had this conversation with friends.

He also lays over the back or arms of the couch.

I got a second computer intoor work. It’s made feel like a moron, twice, and I’ve only had it since monday (and I took yesterday off so I could have someone stick a camera up my bum, so it’s twice in two days.).

The procedure is they ship the machine, then you have to contact the help desk to get the password they set up. I contacted the help desk, the guy video called me to make sure I look like the person on my badge photo, and he told me temp password. Which didn’t work. I tried again, still didn’t work. He gave me another password. Didn’t work, and at this point I was locked out for 15 minutes. he gave me the recovery key, but the way you get to the recovery key screen have changed since they updated the instructions he has, so I felt like a moron for a while, until I figured out what to do. Got into to it, reset the password, logged in, gasynced with my AD password.

Today, I got the monitor I bought to go with the computer, so tonight, I ripped apart my desk, so I could put the monitor on the monitor stand that had been holding my laptop. Realized that the HDMI cables I had were a bit too short to work when i have my desk in the standing position (the usual state), and the computer on the floor. So I built a table to raise the computer off the ground. Plugged everything in, turned computer on. It went bong, nothing showed up on my screens. Fiddled around a bit, got it to boot to the recovery image, which worked on one of the monitors, but couldn’t get it to boot into the os with the displays working. I dragged the 1080p monitor I’d originally used to set the password over, on the idea that maybe it couldn’t actually display to 4k montiors or somthing. The end result of my experimenting is that it won’t boot with a 4k monitor plugged into one of its hdmi ports, unless there’s a 1080P monitor plugged in, or there’s a 4k monitor plugged into a usbc port. That makes no fucking sense, but since I’ve a got a USB-C to HDMI gadget, I’ll live with it. But god damn it, it shouldn’t take me two hours to get that working.

5 posts were split to a new topic: Technology will make your life easier

Hi dearest forumites, I have split off yet another “veering into talking about techie jobs” subsection of this conversation because not all of us enjoy this equally

For further enjoyment please look at the–incidentally named by @pillbox–new thread to commiserate with or ask questions of the tech addicted crowd. We promise nothing but complaints about whatever technology we just have to work with…

I hoped attempting to eat non food isn’t that common, pica is a hard one to treat.

At the beginning of the week, my school district mandated masks for all teaching staff during instructional hours, which is a good call, but one of my additional duties is to mediate disputes between teachers before they get escalated to admin-level resolution. I live in a famously conservative state, and reactions to the mandate have been all over place.

For a group of folks that professionally teach students how to analyze The Crucible, there’s an awful lot of witch-hunting going on, and it is hurting my soul.

Difficult week. First covid case in the undergrads in the second week of term. Not looking forward to the disruption that is going to characterise lecturing at the moment. But that’s background noise.

Yikes. I’m so sorry for the losses you and those around you are experiencing. My condolences.

There are no words good enough for times like that. Hoping you find some moments of peace and meaning amidst the chaos.

I have just finished my accounting for the last 3 months. The worst part of being a freelancer is accounting. In truth I only have ~5-10 bookings each month so not that complicated. And I have software that automates most of it. But still… meh.

But the good stuff is so much more. In the midst of the 4th wave, for us somehow social life is almost normal again. All of our local circle is vaccinated. This is the second week-end in a row where we have met friends in groups and it’s been sooo nice. I have always valued these things highly but the pandemic drove home just how important this is to me. Just sitting, talking, hanging out… for hours. Friday we went to a beergarden for (alcohol-free because it’s migraine week) beer and Schnitzel (not the best beer garden because it was also the local soccer team’s game day, we’re not meeting that crowd). Saturday was a looooong brunch. Also I found out friends whom I thought weren’t all that keen on boardgames… would like to come over for a game night

My husband’s slight pain in his stomach that he had off and on all weekend became intense constant pain during the night last night. Neither one of us got much sleep because of it and I finally took him to an urgent care first thing this morning (after canceling my classes for the day that I teach as a university professor). Urgent care sent us to a full hospital emergency room where, a few hours later, they officially diagnosed him with appendicitis. A couple hours more and he was off to surgery.

Everything went great with the surgery and the surgeon said his appendix had not ruptured or spread infection at all, which was really surprising given the state of it and given how long my husband had had pain. But because of that lack of infection spread and their ability to do a minimally invasive laparoscopic surgery, they were able to let him come home tonight (they weren’t originally planning to) with lots of pain meds and antibiotics. He’s now set up in his comfy chair with some soup and I’m starting to come down from the stress and worry and adrenaline and whatever else that’s been driving me along all day today.

It is amazing what happens with keyhole surgery these days. I also had appendicitis just over 3 years ago, and the worse bit was the ride to Bath hospital (that Beast from the East in March had left plenty of potholes on the Chippenham-Bath stretch). One night in hospital as I was fully diagnosed late in the evening, operation first thing in the morning, another night in, and the next day I was sent home and I left walking, just a tad sore on the stitches in my belly button. I was given a week off work, but I felt guilty two thirds of the way.

Hopefully your husband will have a quick recovery too.

As much of a disaster the world seems like right now, there are some things about modern life which are always amazing to me, and laparoscopic surgery is one of those things.

I’ve discovered that 9-10am seems to be THE dog walking hour in my village. Normally, I see 1-2 other walkers when I go out - I saw AT least 13 others (I lost count) in my walk today.

I made a Giant Jenga set and ruined this kid’s day. (Shared with student and parent permission)

He’s fine. The video was taken by another student, and has been shared throughout campus. He’s kind of a folk hero now.

So today I learned thar I passed my exam and am now a board-certified veterinary pathologist. It also completes my lifelong quest to have more letters after my name than are in my name, so I can now rest.

My overjoyed son made me this, which I notice says in the corner ‘You get to play with me more!’. 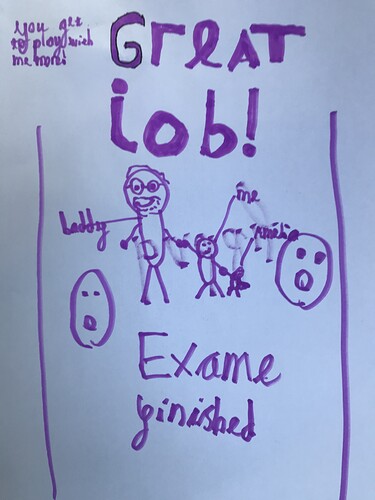 Remembering that you get three more at the end.