Time for an Azul retheme?

Well, I did look into making a “street Azul” set with Opal Fruits / Starburst, but to get enough pieces would probably cost more than the game. Also these days the colours are all quite close together; when I were a lad they had green ones.

Starburst (originally known as Opal Fruits) is the brand name of a box-shaped, fruit-flavored soft taffy candy manufactured by The Wrigley Company, a subsidiary of Mars, Incorporated. Starburst has many different varieties, such as Tropical, Sour, FaveREDs, Watermelon, Very Berry, Superfruit Flavor, Summer Blast, and Original. The original flavors include: strawberry, lemon, orange, and cherry (changed from the initial lime). The tropical flavors include: strawberry banana, piña colada, man The b...

Oh, Netrunner is such an excellent example! Asymmetric gameplay with the Corp behaving exactly like a Corp, and the runner having entirely different tools and tempo to achieve their own goals.

Also impressed with Marvel Champions. Each hero functions differently, and the mechanical changes are REALLY well matched to the character. Hulk is coming up next, and he has a flaw where he might hulk out or revert to Banner at an unknown time and you don’t control that.

Black Widow, unlike everyone else, sets up traps while undercover and then springs them as the hero in a way that’s opposite to every character so far.
Captain America keeps on getting up again, even when it costs him.
When you play them, you feel that the real comic version is having an effect on the board.

I am so tempted by Marvel Champions, as the mechanics sound really good, but I have already gone down the AH:TCG rabbit hole and I am not sure I can financially justify another LCG. But I did just get some birthday money…

I really like it! And because it’s co-operative (but not incredibly difficult like Arkham) you can buy the basic box and you don’t technically need to ugrade ever, so your price for enjoying it (for quite a while) is one copy of the starter box.

What they are doing is making each new hero a tiny bit more powerful, or useful in ways others aren’t, to keep you buying. But that’s only dropping the difficulty on the fixed bad guy decks, so you’re never stuck having to spend.

Yeah, you don’t have to buy more, but when has that bit of common sense ever stopped any of us?

Yeah, who’d ever be one of those SHEEPLE? haha… ha…

It does make me unfathomably happy that Netrunner was the first word replied to this topic.

I hope we’re keeping with that spirit!

4 posts were split to a new topic: Getting into Netrunner

So having just finished our PBF game of Container, I’ll be curious if what I’m about to say rings true to anyone but me: Container definitely deserves mention in this thread.

Not at all for its boats 'n boxes coat of paint, but for its as-advertised, player-driven economic simulation. I’ve mentioned this in passing elsewhere, but I can’t think of any other game that truly simulates a (rudimentary) closed economy without introducing mechanisms to facilitate certain expected market-like behaviours and concepts. There are no sliding scales to represent supply and demand, there’s just supply and demand.

What’s fascinating to me in particular is the reductive approach used. With only 4 real moves for players to make, and little more than a secret scoring card and a Golden Rule* to guide them, it’s easy to call Container’s approach a simplification bordering on pure abstraction. Yet in practice it feels fully organic, subject to the whims and motives of the people actively working within its confines and, theoretically, contributing to the growth of the entire system. Theoretically. What Container lacks in mechanical detail is mostly replaced by human nature, and that makes it dangerous.

It’s sometimes criticized as a fragile game and I contend it’s enhanced by that fragility. Time and again the game starts out like a slow rolling wave, with players making increasingly well-considered moves, biding their time as each turn reveals more about each opponent’s individual motivations and liquidity, milking every extra dollar. Time and again those waves become a torrent as supplies (and thus, time) dwindle and the lure of island living sees caution thrown to the wind in big chancey showdowns. Full boats with all the colours in the rainbow would go for $9 in a hard fought bid-off just a few rounds earlier, but now you tell me you’ve got a single gray box for me? $16, MINE. I’ve got cash now and it’s time to flex it, MINE.

I’ve written this over the course of a busy afternoon at work, so excuse me if this is poorly presented, overlong and scattered! Hopefully I’ve at least made some kind of argument for its inclusion in this thread. Container doesn’t usually make me feel like a captain, but it excels at making me be a baron… or bankrupt.

*One may never buy/sell directly from/to oneself

fondant should be illegal

Fondant is the worst .

is there anyone in existence who likes those strawberry fondant chocolates?

Yeah. Me. Specifically the strawberry ones. Not even sorry.

I don’t normally like fondant icing but there’s some awful local box o chocolates with a strawberry flavored one (Cadbury Roses, for anyone keeping track. Totally different to UK Cadbury in taste). It’s probably the third best one. Maybe its just better on this side of the world?

You did. It worked better than the Susd review to convince me I need to play this game

Are forum games where people have time to think and strategize and lack direct access to their opponents faces more intense? I haven’t played many of those so I don’t know…

Forum games are a lot less intense than real-time games, but a good way to learn a game, or play a game you aren’t confident you could play quickly, or play games that just run too long anyway.

I loved Cosmic Encounter, but I’d never buy it, or probably play it irl.

Container felt great pbf. I think I’d really struggle with it irl, but because I had more time to think I was able to get more out of the game.

I’m finding it a good way to explore new games.

The game that comes to mind for me is Dominion. Really conveys the theme of Limes.

Android: The Ameritrashiest of Ameritrash games. Every single mechanic stems from or feeds into “cyberpunk noir murder mystery”, from the shifting of players between light and dark to the representation of the “Conspiracy” as a maze of jigsaw puzzle pieces that you can carefully connect to power groups around the city. If you do so, and collect favour tokens for those power groups, they’re worth VP at the end of the game. It pays to be owed favours by those really in charge.

Clank! and Clank! In! Space!: Being sneaky is safe but slow. Acting fast (and using powerful actions) creates noise — “Clank” cubes that go into a bag. During a crisis, cubes are drawn from the bag, and if you’ve made more noise recently, you’ll be the focus of attention.

Eldritch Horror: Lots of things, but especially Debt conditions and the Reckoning. Debts come due when a Reckoning card is drawn, and there’s lots of them (don’t get attached to your kneecaps). Most of the time, gaining a Debt is entirely the choice of the player, so you can only blame yourself.

Battlestar Galactica: Every single mechanic encourages choices and player behaviour that organically mimics the TV series. One example: If you think someone’s a Cylon, the only way to stop them is to throw them in the brig. But if you were wrong, you have to bust them out. Characters enter and leave the brig with regularity and drama, just like the series.

Red November: Nominally co-op. But your gnome character can “Abandon Comrade” when outside the sub. Also, you can only enter a room on fire if you have a fire extinguisher… or have just drunken a pint of grog.

Falling: Everyone is falling. The object is to hit the ground last. This game requires a dealer. who deals with each player’s tableau in real time. The bottom of the dealer’s deck is always a set of “Ground”, which means the final seconds have players frantically trying to engineer things so they can avoid those last few cards.

Well, I did look into making a “street Azul” set with Opal Fruits / Starburst, but to get enough pieces would probably cost more than the game. Also these days the colours are all quite close together; when I were a lad they had green ones.

I did exactly this last weekend. A local gaming acquaintance hosted an ‘Edible games’ day (hopefully to become a monthly event). He had attempted to make tiles out of royal icing, but they didn’t set properly (Opening his gaming bag to find melted icing everywhere was a disturbing sight). His backup plan was Starburst (plus caramels for the extra colour). He had tried (unsuccessfully) to find Tropical Starburst which apparently have a better range of colours. 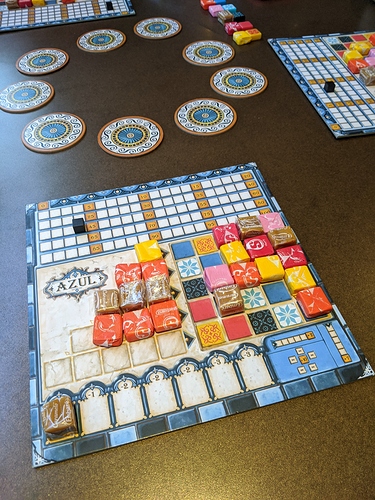 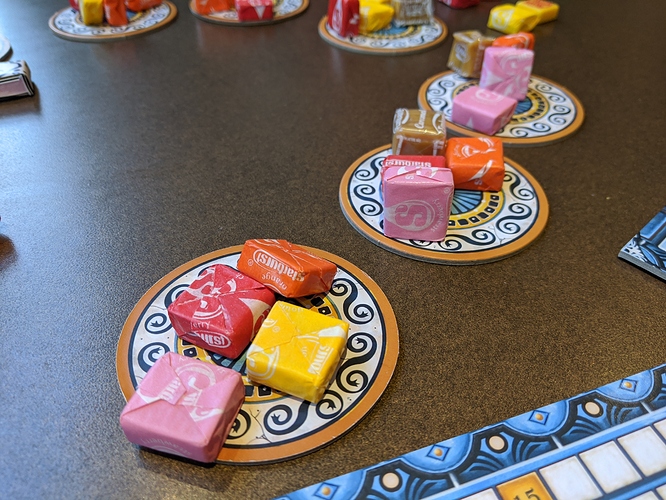 My own offering was an edible version of Oceans. I’ve posted photos of that in the kitchen thread. But the regular version already has great integration of mechanics and theme - it’s fantastic seeing species’ evolve dynamically in response to other players’, and letting older, now redunant species go extinct. The edible version did add yet another layer to this though, with one player deciding they wanted all the yellow candy. Thus it became a defence mechanism to avoid taking yellow candy

I’m a little surprised that Pandemic hasn’t been mentioned. I can remember thinking “that’s absolutely brilliant” when I realised how the Epidemic cards worked, the first time I played it. Combined with the Outbreaks system, I think that’s still one of the most beautiful marriages of theme and mechanics that I’ve encountered in a board game.

I’m a little surprised that Pandemic hasn’t been mentioned.

I never thought of it… probably due to overfamiliarity on my part. But now that you said it, I agree… it is a good example of a mechanism in sync with the theme.

But not all reimplementations of this fit equally well I would say. While I like the Fall of Rome game quite a bit, I wouldn’t add this here. And from what I’ve seen of Season 2, I am not sure about the goods distribution thing either.

Your completely right. I always forget about pandemic.

Rising tide makes great use of the mechanic and adds the “water will flow” element. Which after two rounds (in my experience) gets chanted around the table like some Cthulhu based cult.

I feel that Forbidden Island is an even better implementation of theme than Pandemic. The fact the board is literally disappearing is such a great visual and the pacing feels like a great action thriller with the tiles falling away as you make a mad dash for the exit.