I think i’d like to get my daughter a game for Christmas. She’s 6.5 (first grade), can read (more or less), do basic arithmetic, and has a 6.5 year old’s attention span. (Actually, better than that, as she’s not allowed to watch much TV nor to play video games, etc.) Given the state of the plague in the US, it needs to be something that can be played by three people (better, if it also works for just two).

I’m not a boardgammer. I haven’t played very many modern games. In college, I’d sporadically play with people, but I wasn’t really into it. So don’t assume I’ve thought of something obvious; I haven’t.

It’s a bit of stretch, but Honga is on my wishlist and it has a recommended age of 8+, which when it comes to kids is really hard to pin down how well that actually applies to any given kid.

I’d check out Rhino Hero and/or Rhino Hero Super Battle; I’ve gifted them to my nephew but not actually had a chance to play them.

My former neighbor has a son about the age of your daughter and they really enjoyed ICECOOL when I loaned it to them. So all of those but Honga are dexterity games… and that’s usually how it goes for kids games, but I’ve heard good things about just playing Carcassonne without farmers or similar entry-level/gateway games with some of the sharper corners rounded off.

Tricky, because all my advice would come from the perspective of being a thoroughly obsessed boardgamer. In my house we play whatever grabs her attention, and like pillbox says I carefully edit the experience to suit her ability to understand and enjoy what is going on. So, anything can work, as long as you can tailor the experience. Assume you can’t do that, and my ideas dry up.

(My eldest daughter is almost 6, and not really able to read or do basic arithmetic yet) 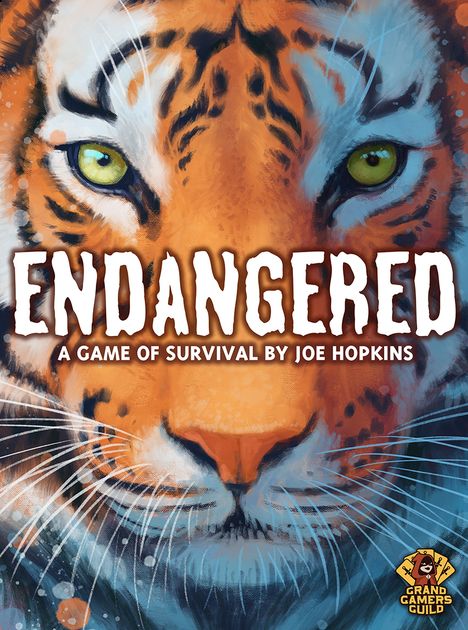 Influence ambassadors and stop habitat destruction to save an endangered species.

Because of the tigers, Endangered came to mind, immediately. Though the box age says 10+, as a co-op game, it becomes a shared activity.

I started with my daughter when she was younger than that age with The Very Hungry Caterpillar, or Funny Bunny, and by the time we moved to NZ (roughly when she was that age, 6 or so) she didn’t fancy them any more, so we got her Beat the Parents, kind of like a trivia game, and The Game of Life, which she loved playing for quite a while, and gives them some basic money skills, if anything. Also, probably the Young edition of Ticket to Ride, First Journeys could be of help.
Also, regarding tigers, there is Meeple Circus, with a lovely tiger meeple there. It’s a dexterity game and it’s quite nice for that age. But it all depends on how much you want to interact with her, and knowing a bit what ticks for her. With Game of Life, my daughter always fancied getting the scientist or veterinarian career, and to get loads of pets. Winning was secondary.
For baseball, I am afraid the offer for that kind of age is quite limited…

Have you considered either Stuffed Fables or Mice & Mystics? Neither have anything to do with tigers or baseball unfortunately, but are cooperative adventure games with a narrative story that runs throughout. Stuffed Fables is the more recent of the two, with some refinements in gameplay as I understand it. But I think that you’d be okay if you focus on picking the theme that appeals more - adventuring toys or adventuring mice.

I’d start with one of the Haba games, with Animal Upon Animal my top pick. Or the excellent Penguin Trap. Cheap, fun, hard-wearing, enjoyable for parents as well. Work well at various player counts.

Pillbox has already nailed what I’d start with: Rhino Hero, Ice Cool as excellent dexterity games and Carcassonne can be good to build up to the full rules.
My just turned 8yr old daughter also really enjoyed Crossing, Forbidden Island, Roll for It and Labyrinth around that age.
Celestia is another one she really likes, but although it can play down to 2, it really benefits from being played by more than 3. Same goes for Sushi Go.
There are a few versions of Fluxx that are set up to be semi-educational (nature, maths etc) and I have to say they work pretty well, Nature Fluxx in particular, which also gives instructions for removing some of the more complicated cards at first. There’s a fair bit of reading involved, but the decks can be filtered a bit beforehand to mitigate some of this.

Stuffed Fables is excellent, with a really engaging story that captures the imagination - my daughter’s been playing with other toys pretending to be those characters and in that world away from us playing the game. The rules aren’t over-complicated once you get used to them and with it being a co-operative adventure the adults playing can help throughout.
The artwork and miniatures are great too.
One thing I would caution about for that though, is that a single chapter in the adventure is likely to take a couple of hours to complete in one go, which can be a big ask for keeping focused attention. I’ve found it pretty easy to save the game mid-story though, by putting the components for each character in separate pouches and coming back to it later; which has helped to break that up, playing a chapter over a few days

My youngest started playing a bit younger than that.

Dobble is basically posh snap, there’s 5 game variants in the tin, which is round so it looks cool. It’s a good one to have on you if you go out.
A co operative game like Forbidden Island. Again, a small tin. It’s a little bit to pick up rules wise, but the co op nature means you can do the heavy lifting. Also, you all win or lose together so minimises stropping (hopefully)
An absolute classic, Ticket to Ride my youngest needed a bit of help with finding the cities, and we used Scrabble or Rummikub boards so he didn’t have to hold his cards. It’s 45-60 minutes though and competitive so might be a stretch.
The Forbidden Tower is a German game where it’s one versus all. The Evil Sorceror hides a key and it is a race between them and the heroes to find it. The twist is that the key is hidden in a hole in the board, covered with a cardboard token. The character pieces are magnetic, so you get a lovely ‘clink’ when you find the key. Then there is a pop up pirate mechanic to free the Princess.
Another vote for Rhino Hero, it’s great and visually very appealing.
Maybe a Roll and Write? Something like Doppelt So (Twice As) Clever? Very tactile, quite maths-y. Something to really puzzle over
Loopin’ Louie (or Loopin Chewie if you’re into Star Wars) is marvellous, silly fun. Also doubles as a drinking game!
Just seen above - Labyrinth is great and I genuinely get crushed by my son at it. Sushi Go is lovely, but may not play well at 2.
Some of the Lego games (I can’t think of the names) are really weird and not great fun to play.

My kid is 8… but is playing games since he could stack blocks and roll dice… so I’ve just asked him what he thinks are some good starter games for someone around his age or a little younger. Here’s what he recommends

And for some small card games:
Coloretto
Cockroach Salad

Hope some of those help

Helvetiq has some nice games for younger audience. Bandido which is co-op and could even be played alone Hippo and Kariba

https://www.boardgamegeek.com/boardgame/220133/endangered
Because of the tigers, Endangered came to mind, immediately. Though the box age says 10+, as a co-op game, it becomes a shared activity.

this looks like a fun game, but it’ll be way over her head. Co-operative is fine, but she needs to least think she’s driving the action, and I think this would be too much for her.

Have you considered either Stuffed Fables or Mice & Mystics?

I hadn’t considered anything, beyond the classics. I really have no idea what’s available, and don’t know how I’d go about finding out what’s available (in olden days I’d have gone into the local store, which is very hit or miss, and sometimes results in being pushed what’s on the shelf now), which is why I’m asking you guys. Stuffed Fables looks like winner, I’ll discuss it with my wife.

Someone mentioned the game of life. My wife bought a copy on whim this summer, and it’s not at all the same game as from my youth. We played a couple times, my wife thought the new mechanics are stupid, and she gave it away (and bought a reprint edition of the original game.)

No reading but thinky. I even enjoyed playing it

Serious to goodness, Outfoxed. Everything else can come later. A bit Yahtzee, a bit Clue, but much better than either. Teaches deduction beautifully.