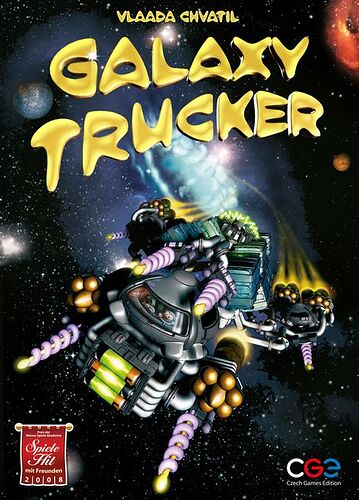 So there will be a new smaller (?) version of Galaxy Trucker in Q3.

Since I don’t own the original this might be worth looking into.

Hmm very interesting… Have mixed feelings about the new art, but it’s mostly the same idea. I hate change, but I’ll admit that the old uncomposited 3d art was… pretty bad. New one curiously takes the enemies pics from the digital version, so they’re a lot less like pepper shakers now.

I wouldn’t buy it, but I’ve also invested like $300 in the old one? And I like it BIG. (Did I mention my Anniversary Edition has the base game added in? For 9 players? It’s great.)

That being said, it was a weirdly complicated thing for a light funny game, and I think making it smaller and faster is the correct direction technically speaking. And I always cut out some of the rounds anyway.

Since I do not own anything except the app but have played a friends’ copy… if the price is really around 30€ I might go for this one. Need to play the app again…

Will look into it. Was interested on it now that a friend sold his.

It never clicked with me. It’s so chaotic, I had no time to savour it, and then most the game is passively watching the thing you built fall apart. I can see why some would enjoy it, but I enjoy planning and working through problems. I’ve heard a few of the expansion modules help with that (?), but there’s not enough fun there for me to want to try those.

It’s all “oh no, what have I done” with no “let me learn from my mistakes and fix this”

It has that SUSD thing of being really easy to wax lyrical about dressing up the theme and making a game sound exciting, but game wise it doesn’t hit for me. I remember watching their review and thinking “the game feels like none of this for me!”.

Well, this explains why it’s impossible to get the first Big Expansion.

I’ve always heard that this game is
a) very popular, and
b) a game of building a thing, getting to the endgame, and then it explodes the end.

First phase of the game you grab tiles from the center of the table where they are face down and try to fit them onto your ship mat. There are tiles for engines, lasers, shields, storage, cabins and probably more with all the expansions. It’s a bit like competitive multi-town Carcassonne on speed.

The whole phase is a bit hectic and depending on how quick you finish you have the initiative in the second phase (it’s been a while since I played). It is nice to finish early.

In the next phase it’s all nail-biting to see if you survive. The whole convoy of ships has to fly through space and a number of events happen like alien attackers or asteroids etc. that try to destroy your ship (each tile has coordinates on your ship and dice are rolled (? I think) to determine where the destruction occurs and what you need have built to prevent it). You either need shields to repel them or lasers to shoot them and you need engines to move ahead and reach the goal. If you reach the goal with either crew or cargo you get points or something like it.

Often enough that works for some people but more than once I saw a ship limping towards the finish line with a single engine tile and maybe 1 crew.

I think Galaxy Trucker requires a certain mindset when playing. It is not a game of strategy or tactics, you basically just need to be in the mood to laugh at misfortune, both yours and the other players’. Yes, you can look at the various decks to see what hazards are going to come your way as you build your ship, so you can try to counter most of what you will encounter. But, since it is a timed phase and you are flipping up tiles one at a time at the same time as other people, when you are frantically searching for a laser with a particular connection, not realizing that another player put it on their ship a minute ago, you have to be able to roll with that. Your ship is not going to be perfect and is not going to be able to handle everything.

However, depending on the dice, you may be lucky. That exposed connector that you just could not avoid never gets hit. The large laser shots that cannot be blocked by shields happen to miss you entirely. Meanwhile, your opponents are getting shredded because their exposed connector did get hit, and a follow up asteroid which would have been shot now breaks their ship in half. And you laugh, knowing that in the next round, that’ll probably be you.

I have played the app a lot, but the physical game only once, and it got interrupted after the first round and though I want to play it, it has not hit the table since. Something I hope to change this year, putting it on my 2021 challenge list. But yeah, if you are not in the mood for watching this thing you built get totally destroyed, only to build another one and likely see it get destroyed, Galaxy Trucker is not the game to play. But if you just want to sit back, cobble together a hunk of junk and throw it out into the wilds of space to see how kindly the Fates will be, it’s perfect.

The idea of the game seems great to me but I think playing the game would be not so satisfying.

In modern terms I’d describe Galaxy Trucker as a (slightly) more strategic Quacks with spatial tile laying, that takes twice as long with three times as much down time as a result.

If it was as snappy as Quacks, I think I could at least tolerate it. Likewise, if Quacks was as long as GT, I’d hate it. Pace and timing is what makes or breaks the randomness.

What down time is there in Galaxy Trucker? All I can think of is if you finish first, waiting for your opponents to finish their trucks before the next phase starts, and there is a timer for that which I think only provides them a minute more building time(?). Otherwise, everyone is building simultaneously, and everyone is experiencing the cards more or less simultaneously. I guess set up for the next round is a bit of downtime, as you need to shuffle up all of the tiles and get the new hazard decks ready, but if everyone is working together on that, it should not be very long, and again, everyone would be involved.

I am not trying to be combative here, just genuinely curious.

For me, the shipping/destruction rounds are down time. Carrying out rote instructions one by one feels like elaborate set up time (de-set up?) rather than game time. I’m just waiting until the end to see what’s left over, there’s no enjoyment in the process. Splitting the process into steps makes it even more laborious, rather than growing tension/anticipation of what’s next.

I can see what it’s trying to do, and other people going that way, but it pushes me in the opposite direction rather than pulling me in.

It’s Sisyphean absurdism in whether you find enjoyment in the chore or not. You either find rolling the rock back up the hill enjoyable in and of itself, or you find it a massive ballache.