Perhaps what we ought to be looking for, for an equipment catalogue at least, would be one of those snazzy aluminium attaché cases with the foam linings that have special cut-outs for each thing, containing a cap-lock pistol tapped for sights, a laser sight, a screw-on suppressor, cleaning gear, and little boxes of “Blue Sky® 10mm Minié balls” and “Sun Hill® №1 quality hand-picked pistol cartridges”.

I’ve just had an idea for a really irritating innovation of which I feel sure the time will come soon:

I ought to patent this business method, right? Right?

I ought to patent this business method, right? Right?

Well, that’ll stop anyone else using it, so yes. 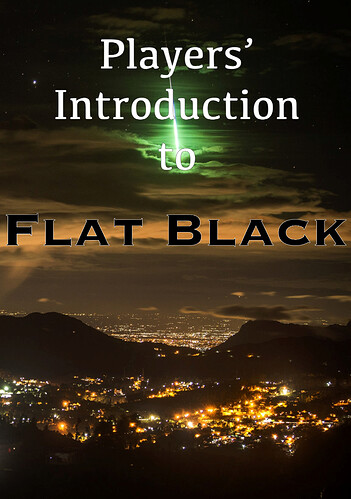 That’s pretty good. It conveys “on a planet” and “fairly high-tech” well, and the sky strongly hints at space.

I don’t really get a feel for what this cover should be invoking. Other than the green streak at the top, which I can’t really tell what it is because the words are right over it, it just looks like an aerial view of Los Angeles county at night.

The problem is that I don’t have any artistic ability nor even artistic imagination, and that I’m not keen enough to pay an artist.

Yeah, I don’t feel I can add much to this. How do you have a city from far enough away that you can’t see individual buildings and still convey “this is a weird alien culture”?

Perhaps what I need is a picture of a person in extravagantly unconventional clothes like the below, with ultra-tech equipment and against some sort of futuristic or other-planet background such as two moon in the sky or a planet seen through a viewport. It’s a clichè, but that’s because it does the job. 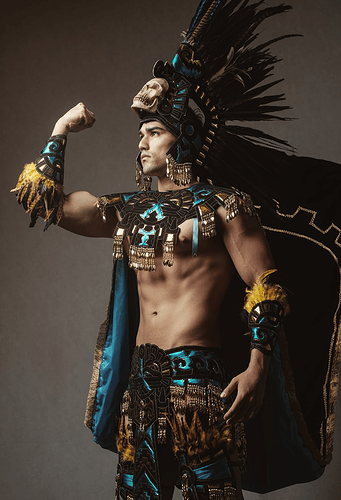 I have a reasonable sense of layout, but I can’t do art.

Conceptually what I would be looking for is “people from the stars are in a weird alien place”. So that might look something like this.

Centre of focus, the party of PCs. They have obvious high-tech gear about them, though it’s not gun-heavy. One of them’s consulting their vademecum, perhaps. They’re making their way through the scene.

Around them: a street scene with humans, but weird humans. These people are in (pick a world) distinctive costume doing distinctive things; maybe they’re all split into groups of obviously-male and obviously-female, or each group has an obvious leader with a set of followers. Something that’s immediately apparent as “a bit odd”.

And in the top of the background, a sky with odd features, perhaps a double crescent moon or a shining ring system.

This cover of Jack Vance’s Marune: Alastor 933 offers another approach. I’d replace the white guys and the blah clothes, of course. 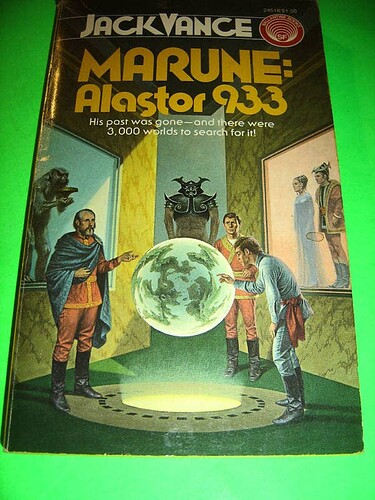