Clash of Cultures is the best 4x I've played recently

And possibly ever, even though I absolutely hated it during the first game*, since then I’ve sought it out and played it where I can.
Less dry than Eclipse, less frustrating than TTA (and it turns out I’ll always prefer a map), less awkward than any of the Sid Meier Civ games with tanks against footsoldiers and the like, and less mathematical than Dominant Species.

Ok, reading back I realise I haven’t played that many 4x games, and despite wanting to for ages still haven’t played TI. But still, Clash of Cultures is great fun, mainly because a lot of it makes sense (once the movement rules are grokked), and the games feel like mini epic adventures.

*Had a Civ which could use barbarians to become very strong, but kept drawing dreadful events. Readjusted my expectations for future games.

@MarkSP ! Hey. We’re currently playing a game of it in the forum!

Yup, I’m in that game, and I can see the appeal. It does get a lot of stuff right.

I saw that, going to settle down with a beer and give it a read.

The owner who brings it to the club gets games of it booked well in advance, and plays pretty much nothing else ATM

Played it again yesterday. Japan, who were tough to get going (first speciality requires collecting 3 food, which is tough and not usually a great idea), but I got some lucky cards and was horribly militaristic to a neighbor for objectives. In the end I only won thanks to 2 cultural influences. 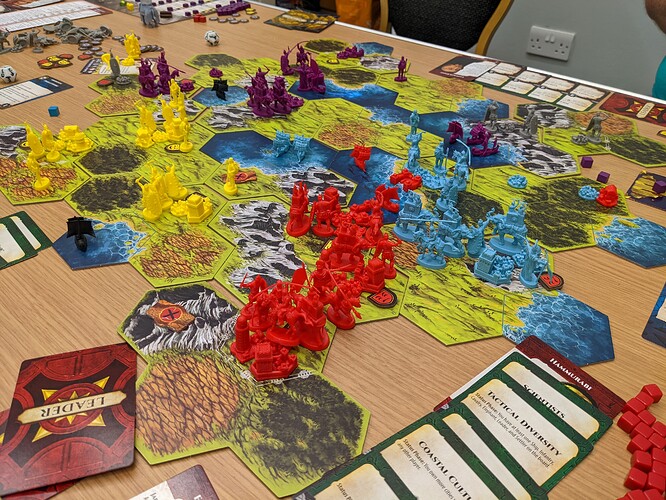 I’m the mass of hemmed in red plastic.

While the game design is good, I really don’t like that homogeneous mass of plastic.

Agree, give me wood (pref screen printed) any day.

That was a thing I found yesterday playing the older edition: glancing across the board, I can tell mobile units from city parts, but counting troops in a hex needs rather more attention.

Also I looked at the parts and assumed that the thing which looked like the Acropolis was a temple, while the thing with a dome that could be an observatory was an academy. Not so.

This is a temple. 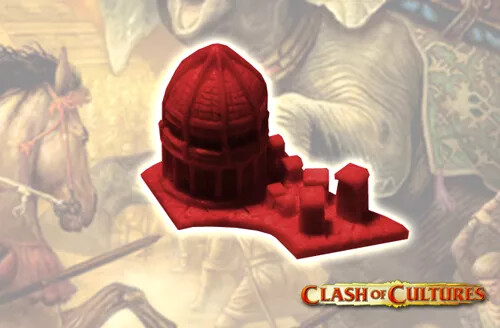 This is an academy. 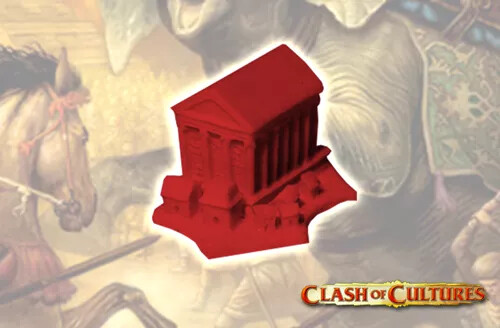 There’s no fixing the building choices, but I wonder whether a simple black wash over everything would help differentiate the pieces?

After a chance tweet exchange I organised another game of this yesterday! Did Viking stuff as the Vikings and incurred the wrath of the Phoenicians. Unfortunately everyone else went pleasantly nicely to each other in landlocked spaces, allowing one player to just win. Close game though. 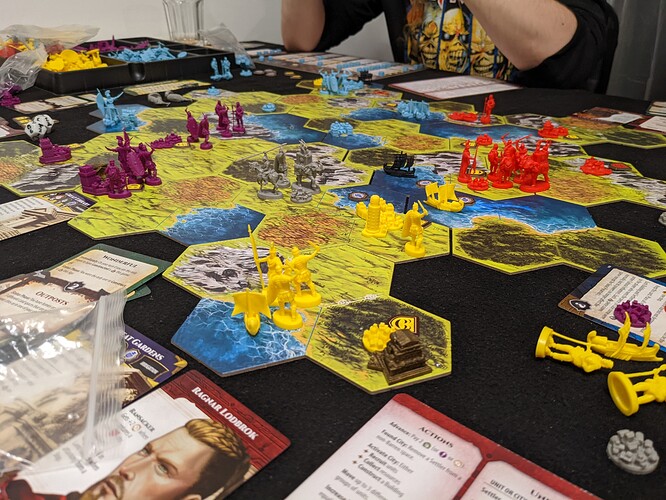