Ho ho hello! Ia Santa! It’s Christmas, the time of year when even ostensibly sane people will consider trying one of these ‘game’ things. As the token geek in the family, it often falls to me to organise games. I thought it would be fun to compare gaming Christmas notes… have any of you games that are reliable family winners-over?

This year, I opted for the words-only version of Codenames, which has been a huge hit - both sides of the family are going to get a copy. Previous family-fun games have been Time’s Up! (my personal favourite) and Super Rhino Hero. Magic Maze has been a big hit with non-Gamer friends, but I thought was probably too much for family.

On the harder-core gaming side, it was a good haul for me this year, as I’ve been getting more interested in board games. This year I got Mage Knight, Descent and King of New York, and I’m very much hoping to get a copy of Gloomhaven in January, after some saving-up. Recent games that have been great to play solo after kids are embedded are Arkham Horror (card game) and the immensely wonderful Pandemic Legacy (not sure I’ll get season 2 though).

Anyone else have any festive board game thoughts? 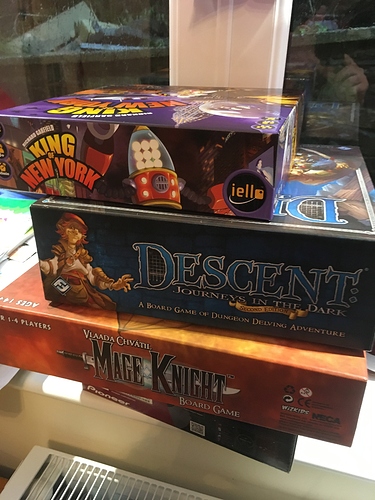 People have just gone home from Boxing Day Boardgames 2 (we had BDB1 the Saturday before last, because some of the regulars couldn’t make it to this one, but then they were ill anyway). My wife doesn’t game but she’s happy to have people over.

On "Boxing Day" because it's a tradition now (i.e. we did it for the last two years), a bunch of us without family commitments got together for boardgames. (Actually we did it a week earlier on St Eusebius of Vercelli's day, because some of couldn't... 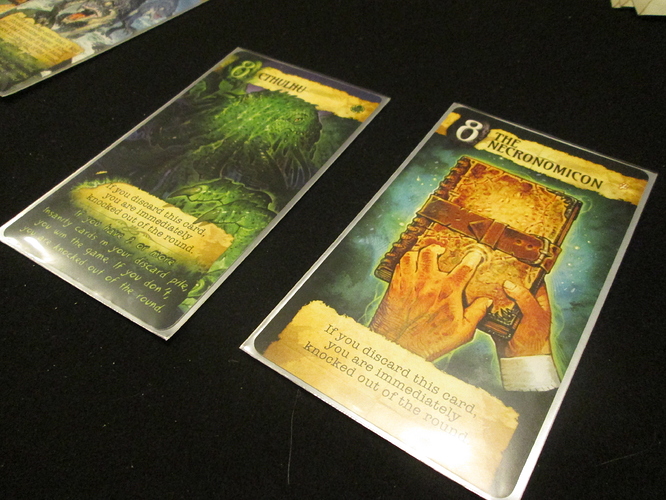 We’ve cleared the table off, I just need to cajole the rest of the family to think, rather than watch the TV…

No Christmas gaming for us, alas.

What, no Fog of Love?

(I am waiting to hear the first reports of this game killing a relationship.)

Somehow I’ve managed to miss that one. When I just Googled it autocorrect entered the name as “fig of love,” which didn’t give quite the expected results.

Arkham Horror arrived from Santa (well done, Santa!), but we’ve been so busy we’ve only managed a quickie of Ticket to Ride Europe so far! There was a virtual game of Waterdeep that finished up too. Naturally I didn’t win…

@BigJackBrass: sorry, let me onebox that: 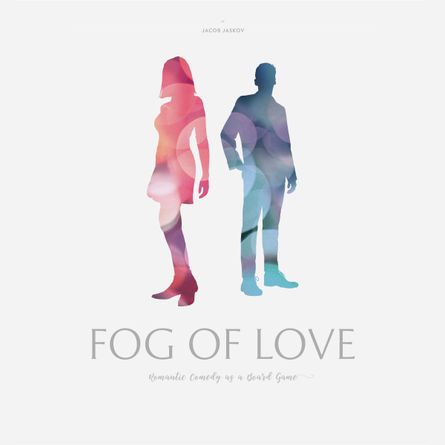 Two lovers try to navigate a relationship with different personalities.

Lots of 2 player games for me, since my brother was staying (and on the day there might have been 3 players we had no electricity and went to the cinema instead).

Oh I’ve been tempted by 10 minute heist before, what did you think of it?

Magic Maze is now one of our firm favourites, I’ll bring it along to Expo I think.

I seem to like it more than anyone I’ve played it with. So I’ll see you there.

(I’ve also made a custom inlay for my copy, but it’s too expensive for people to want to buy it.)

With a three year old at the center of the action gaming centered around Go Go Gelato and my antique TSR fantasy forest.

I’m hoping to get Eldritch Horror and at least one expansion out during New Year’s Eve.

Classic board games are about all that’s worked for me with family but the friend group has been pretty open. Tokaido is the current group favorite.

10 Minute heist was fun - I’d certainly play it again, and it is, as the name suggests, a very quick game. Mechanically it is similar to other games where you are trying to gather a bunch of cards with the same number on them, and also a bunch of others with as many different icons/colours as possible (but not too many, as player with the most points worth of each colour scores, and you can spread yourself too widely).

In the 2 player version there’s an extra smidgen of complexity - you are grabbing one treasure for yourself AND removing a 2nd one from play. So you spend more time thinking about how to screw your opponent than I suspect you would in the 3 or 4 player version. I think this could become one of our “The GM is stuck in traffic - let’s play a couple of hands of something while we’re waiting” games.

Well, we just had a party here, mainly comprising anxious parents and raucous children. I’m increasingly of the opinion that children are like poos - your own are of some interest to you, largely for health reasons, but anyone else’s are disgusting.

The true horror of the day was that I was forced to play… shudder… Snakes and Ladders. All my suggestions for augmenting the appallingly luck-based mechanics (with a rudimentary deckbuilding system, or worker placement) were met with derision and hard stares. Still, it has given me an idea for a Kickstarter, but I thought I’d test the water here… who would pitch in for Snakes and Ladders: Legacy?

As I understand it the main point of Snakes & Ladders in the modern boardgaming world is to teach the tinies to take their turns, and win or lose graciously. For such a purpose, it’s not a terrible game. At least it’s not Monopoly.

Here’s a similar sort of thing from about 1790, which is blatantly Moral… 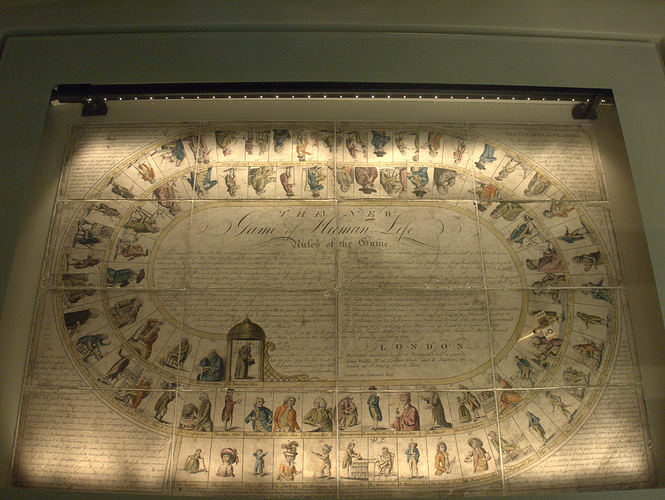 (photo by me, at the Museum of London yesterday)

I feel your pain.

Candyland is the one I’ve endured for the taking turns education purpose. It uses color cards rather than numbers so even basic counting skills are less necessary.

Ben Sargent made it a little more interesting: 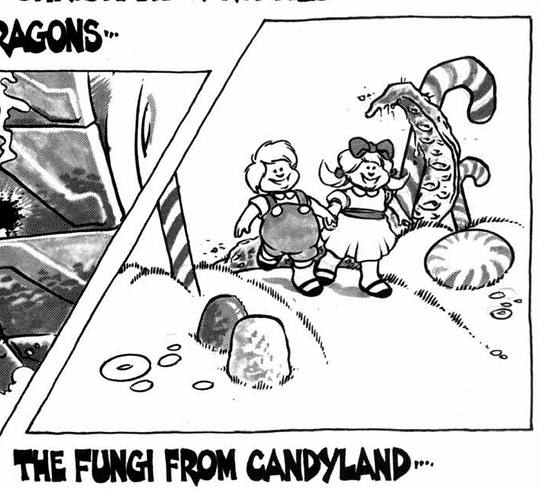 Well, that’s the idea, but literally against the odds, Elliot has somehow managed to win all seven games he has played, even with 4 players. This is not really teaching him the things I was hoping! 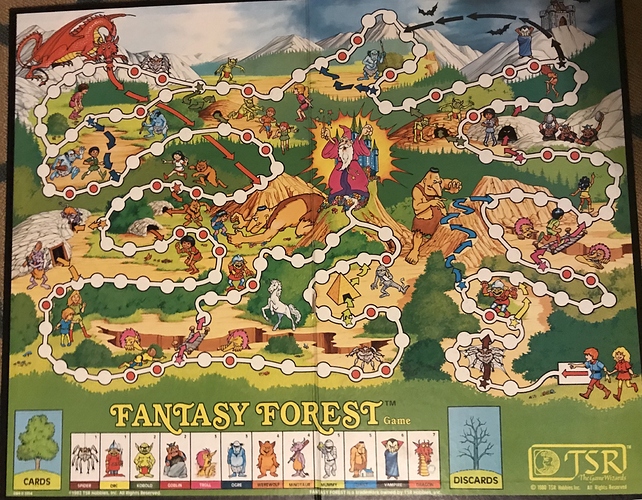 My preferred board for learning to take turns. No real moral component.