I broached the possibility of running an Eric Lang area control game by forum in a previous thread but it wasn’t entirely clear to me if people were interested or not. So I figured I’d pick a game - Blood Rage and see how it goes. I’d be running it using a Tabletop Simulator mod with complete content to track game state, and looking for between 3 and 5 players, not including me as I’ll stick to facilitating. I’ll screenshot play as appropriate and use PMs to convey secret information like cards drawn. 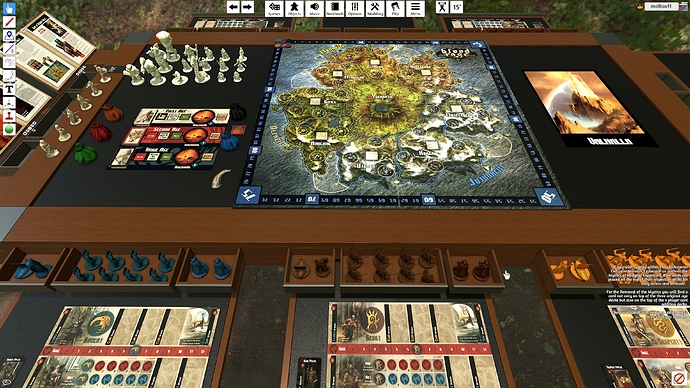 The basic idea of the game is that you are viking clans battling it out for glory and the favor of the gods as Ragnarok closes in and destroys the world around you. Everyone’s clan will start equal but you’ll obtain upgrades and special units and such that will specialize your play as the game goes. There are a number of mythological monsters, for example.

If you’d like an official rules PDF is available, but I’d recommend looking at the Esoteric Order of Gamers’ condensed and clarified summary, like with any game they support: https://www.orderofgamers.com/games/blood-rage/

Open to questions and/or signups. If we get a minimum quorum I figure I’ll give things another day to shake out for sure and then run with whoever we’ve got at that point.

Edit: Oh, and while it does contain expansion content, I assume we would leave those out for a starting run unless people would prefer otherwise. I am agnostic on the subject. (Might not 100% identify what’s expansion, though.)

Well, clearly nobody’s interested, so my question is: why not? Bad timing? Do people just not care about Blood Rage? Some other issue I haven’t considered? I’d be up for running other stuff depending, but silence is always a bit dispiriting.

It seems like probably not my sort of game (and I am filling most of my gaming time with the PBFs I’m running and Rallyman GT championships on BGA).

Never played it…very interested in it, but I don’t know the rules, and it looks like I need to do some reading first…

Well, as long as we can get at least one more person, I’m still interested in running. (I don’t think it would work for me to also play since there is secret information I’d need to convey to players.)