Battletech: Specifically Mechs we love despite all the math that tells us we shouldn't (but anything really)

Do you think Classic Battletech would work well as a PBF?

Hmm. It’s a pretty slow game at the best of times. But there’s no hidden information, and we have a dice roller. @Canadian_Errant, would you have any suggestions about forces and map size?

I actually think that something like Grinder would be quite suitable for play by Forum.

Basically the rules are, it’s a free-for-all, using the mechs that are in the starter kit, divided into 4 tiers. You start by choosing a tier 1 mech, which you drive until you your mech is killed (which includes 3 engine hits or 2 gyro hits, but not leg blown off or anything like that), at which point you graduate up to the next tier of mech.

Running a scenario would be slightly more difficult. I’ve actually Sent the link for this discussion to a friend of mine (Dave) who is part of the Catalyst Demo team and will not only have a handy set of “games”, but lots of scenarios and etc that are already premade… and he’s been running a battletech campaign using … google sheets, and and a couple of other things so he’s got tools premade that he’d almost certainly be willing to share that would avoid the “having to build things completely from scratch”

Long story short: Something like Grinder (which was developed as a low-intensity form of battletech that people can drop in and out of whenever they want, during a convention, if there’s room at the table) might be an option, but it doesn’t really have an end-of-game kind of thing.

Or, we could try an actual scenario, with a purpose (of which there are lots of different choices). I would suggest one person, one mech to start. Keeps force generation simple.

The other things is Initiative - Moving - Firing. Just make sure we get all the phases so we’re all in sync. Given digital resources, we could do maps of any size really (I mean, Megamek has a map generator that can handle lots of things very easily, we could morrow the map graphics from there, I guess (the code is in Java, I think, but we may not want to get into that).

Capture the flag could be a choice.

So Dave is saying he’s using the Megamek map editor to create custom maps, Megamek icons, and moving them around in Roll20. (Obviously, we wouldn’bt be doing it in Roll20)

I haven’t played in gazillions of years, and remember very little of the rules. But I do remember that the stock vehicles were poor designs, and you could easily do better.

My experience is a lot of “custom designs” from scratch replicate things that already exist. In my experience it’s better to start with a stock mech and then tweak, if you want to tweak. I strongly suggest download Solaris Skunk Werks and check out the master list there

My instinct would be to play a simple 2-sided scenario with players divided randomly between “Attackers” and “Defenders.” If it works there is probably a campaign system that would work… I know Ash at Guerrilla Miniature Games has done a bunch of Watch-it-Plays of Alpha Strike campaigns.

But I’m getting ahead of myself. I would say a rough tonnage limit per side, and then let the teams decide who wants to take what mech within that tonnage total… so, if there are 3 mechs per side, maybe 150 tonne limit (so three 50 tonners, or a 60, 50, and 40… or even a 100 tonner and two 25s? That might be a bit extreme). And I would agree sticking with stock mechs for the time being, but maybe some pilot customization? I don’t know how the rules for that work (heck, I barely know how the rules for anything work, other than in a rough sense).

Maybe to keep things moving each side would have one Lance Commander that can give orders for a mech if it takes longer than a day to respond?

Just thinking out loud. I like the idea of Google Sheets to track damage and heat though, that’s neat.

Battlevalue is the mechanism for balancing forces- this can be done in SSW. Although any decent reference including sarna.com has BV for stock mechs- not for custom- and doesn’t deal with C3/those kinds of advanced things which change BV for a force (again, SSW does). When I’m playing lance-on-lance with my friends, I think we usually do about 8-10k BV a side.

with SSW you can do the mech + pilot mathematics for BV.

I’ve found that just “attackers vs defenders” is a bit… loose? It’s better to have “missions”- Dave cooked up a whole bunch for running senarios at gencon. They can be anything from capture the flag/gizmo/widget to Do Force Reconnaisance to “Destroy target important mech”.

I like the Capture the Flag scenario or everybody-for-themselves b/c it avoids the need to create teams, with a leader, especially with people who aren’t already familiar.

And also avoids issues with uneven numbers of players.

I trust your judgment! I didn’t mean just “Attackers vs Defenders”, but I’m happy to bow to your experience.

I will say that I’m less enthusiastic about a free-for-all format because I find that tends to reward overly cautious (some might say “boring”) play and often has people gang up to kick other players when they’re down, but again, I’m new at this and maybe Battletech will be very different than the other free-for-all games I’ve played!

Either way I am excited to see if this is something we can try!

I’ve used MegaMek but I think it’s designed for real-time play more than PBF. (Also, Java is a pain.) But it’s certainly doable in principle: maps as simple images, mechs from MegaMek, and I can put them together with Inkscape. 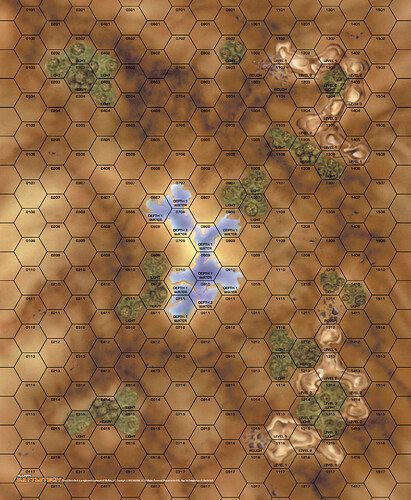 I would suggest a straightforward test game with a clear end condition to start with.

This is one of the things I like about Grinder: when you die, you move up to a bigger more capable mech. So the people who hang back and don’t get involved are very suddenly very outmatched.

But then they come back in a bigger, heavier mech in pristine condition? That still sounds… suboptimal?

My experience is a lot of “custom designs” from scratch replicate things that already exist. In my experience it’s better to start with a stock mech and then tweak, if you want to tweak. I strongly suggest download Solaris Skunk Werks and check out the master list there

That could be, but when I was playing, there was much less material, and I doubt we had it all.

But then the other people who are more involved come back in yet bigger heavier mechs. Until they graduate from Tier 4 back to the beginning. It tends to encourage players to try out all the various attacks and mechanics because if things go badly, you tend to get a new mech.

Well now there’s lots of stuff. No point not looking at SSW and seeing all the modern designs, seeing if there’s something there that is what you want. Many are optimized.

Me too. IMNSHO the Locust is the best light murder death killing machine in the game… arguably… the Jenner is probably a better optimized mini-maxed mech munch machine (it was clearly someone at FASAs favourite designed with a good armour/speed/weapon mix).

Locust variants and customs can fine tune the load-outs to match ones personal play style. I have six painted Locusts in my collection, and a bunch more that if I live long enough I will get around to painting.

The best Locust is the Clan 2C variant, but I’m biased. a I designed the stats for the original Clan 2Cs, apart from the Jenner.

You can, and it’s not a bad choice to do so, but the 85ton chassis has more internal points, which from a min-max perspective, assuming one is just playing with the build rules and not the cost rules, gives it the edge.

That is true today, but not true back in the day. As a former FASA freelancer, one of the things that bugged me was the marketing model that relied on selling TROs, which led to the plethora of mech designs.

If it had been down to me, which clearly it wasn’t, all the designs would have been optimized for weight/armour/load-out using the rules that when put into a spread sheet clearly limited the effectiveness of certain combinations eg: the Charger.

But my method would’ve limited the number of official TROs, except I had a plan for proper vehicles and combat support assets that would’ve been interesting. Interesting for me when I was a fan.

For those of you who don’t know me, and perhaps have an interest in seeing my miniatures, or reading about my very old BattleTech campaign, here’s a couple of links:

Note: the links take one to the last post in each thread. Sorry about that, I don’t know how to get Blogger to sort links; I’m not that smart.