My longtime favourite SF/GP RPG ForeSight has a representation system for toolkits. You can get a NuSwiss Army Knife (pocket multitool) that gives a -2 equipment penalty on any Repair¹ tasks. Otherwise, you can get a Basic, Standard, or Advanced toolkit (or fit out a Small Facility or Large Facility) specialised to any field of knowledge with a “size” rating, that gives a -1, 0, +1, +2, or +3 modifier (respectively) to Diagnose and Repair tasks using that FoK. The grade of toolkit, “size” rating of the field, and tech level combine to tell you what the toolkit costs and masses. The usual termingology was grade field “kit”, e.g. “basic emergency medical kit”.

When I was a student at ANU and for a couple of years after, nearly all my friends were RPG friends, and the thing that we far most often used to do together was to play an RPG. We couldn’t afford much else. Anyway, where some people have an “everyday carry” of tools, weapons, and survival essentials, I used seldom to go far without taking a few things along in case a scratch RP game or supernumerary session of one of our current campaigns should break out.

My minimal outfit of RPG essentials was referred to as “Brett’s basic RPG kit”. It consisted of copies of ForeSight and HindSight, an exercise book or writing pad, a calculator, a pocket atlas, percentile dice to use, percentile dice to lend, a d6, a rubber (eraser) to use and a rubber to lend, a handful of mechanical pencils and a biro. 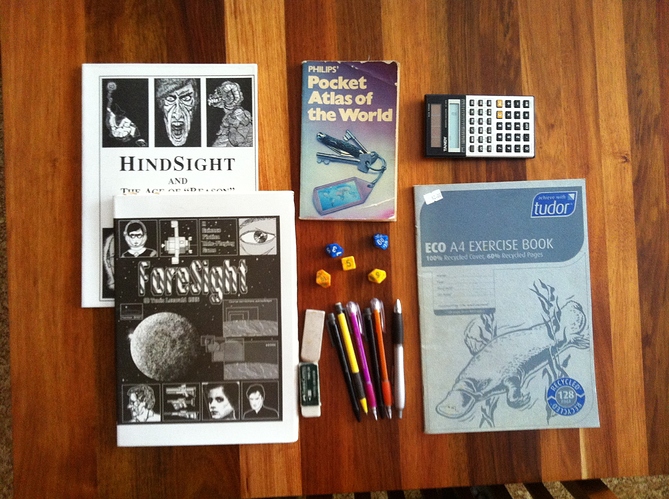 When transport was easier (e.g. when I had my own car) or the danger of an outbreak higher, I carried my standard RPG kit: two copies of ForeSight (one to use and one to lend), two copies of HindSight, enough dice for a whole playing group, a calculator, two rubbers (erasers), a handful of pencils, a biro, red, green, and blue felt-tips, an exercise book or writing pad, index cards in two colours, a pocket atls, background material on my usual SF setting and my usual fantasy setting, folders containing my notes on my current campaigns, a folder of blank character sheets, and folders containing pregen characters for fantasy, contemporary, and SF scratch games. 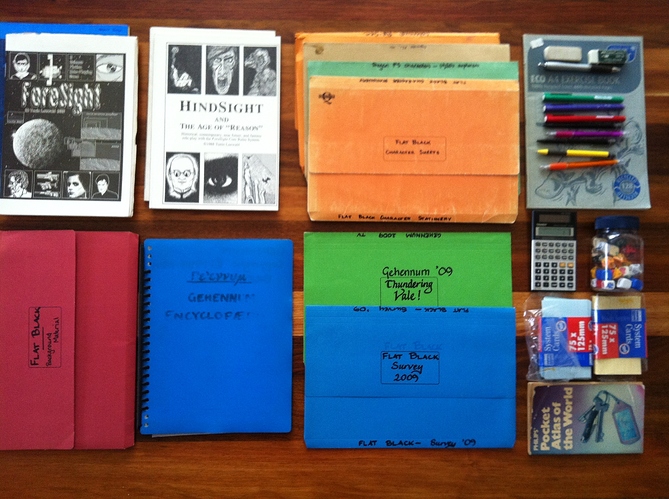 Nowadays, with portable computing devices, Wi-Fi access to the Internet, and almost ubiquitous printers I suppose a chap who had a well-prepared DropBox account or Google drive could manage rather well with a very portable RPG kit like this: 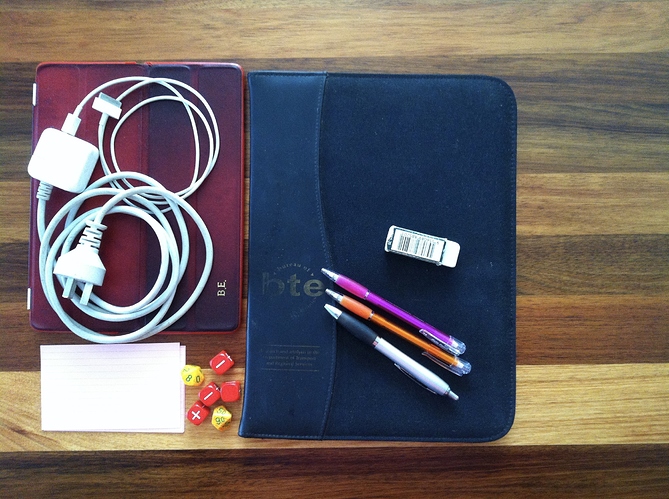 That effectively contains complete rules for a dozen or so RPG, plus a bunch of supplements and settings, many, many pregen characters, and access to Google Maps, Wikipedia, and several vastly detailed fictional settings. I suppose it would have to rate as an advanced RPG kit. Just as ForeSight might lead you to expect, a higher-tech toolkit is smaller and lighter but rather more expensive.

¹ In ForeSight “Repair” is a generalised tool-use skill that is also used (with enabling fields of knowledge) for making things new.

As I mentioned in a previous thread, my advanced kit used to contain a lot more sets of pre-gens.

My favourite RPGs are reasonably detailed 1980s designs in which character generation requires at least a bit of knowledge of the rules, and takes some time even for players who understand the choices to be made and the bases to be covered. Recent game designs are supposed to have much simpler character representation systems that allow much quicker character generation — Spirit of the Century is supposedly designed for scratch games in which chargen and a whole adventure are done in an evening …

Who else here has a set of bookshelves amounting to an RPG small facility? Does anyone have the specialised table and cabinets filled with miniatures that might constitute an RPG large facility?

I know people who GM entirely off tablets, though I don’t think it would work for my current style. (Granted, I don’t have a tablet large enough to try.) The ability to flip quickly through a book to find the thing I hadn’t known I was going to need is quite important to me, and even when I’m running an adventure I got as PDF I tend to print it out so that I can both do that and write on it as things change.

My standard packing for a game is:

Apart from the other relevant GURPS books and the game file, that’s pretty consistent between games.

I don’t think I’ve ever run a system that needed a calculator at the table, and if players need copies of the rules or writing implements they generally provide their own. (Occasionally someone forgets their dice.)

Much of the campaign background never gets printed, but goes somewhere on tekeli.li.

Neither have I. But they are easy to carry, some players find one indispensable for generating a character on a budget of a few hundred points, and I occasionally find one useful for working out something quantitative in the game setting, such as the mass of a mountain or the travel time to another planet on a torch-ship orbit.

Who else here has a set of bookshelves amounting to an RPG small facility?

I do, although the non-RPG books are a significant part of it. For GMing at home, I usually have a page or two of notes, a pen, dice and a tray to roll them in, and pull GURPS books off the stack as I need them. I’ll often ask players to look stuff up, since they tend to have mobile internet devices to hand, connected to my Wi-Fi.

Hmm, let’s see. I think it’s five or six long Sten (just over 1m each) shelves of role-playing books, two of them being GURPS. Two more shelves’ worth have gone to the attic recently.

I had been GMing largely off my iPad. Just lately, though, I tried to use it and discovered that all the books I had put on it were in the cloud, and I couldn’t download them at the time, not having broadband access where I was. Annoying. I’ll have to check whether I can download books at home and have them stay downloaded. But really, if I put a file onto the iPad, it’s presumptuous of Apple to put it into the cloud in the first place; that didn’t use to happen.

Technical paranoia has been a way of life for me.

Last Essen I was one of the few people who could find a named restaurant, because I’d downloaded the map of the local area onto my phone before I’d left home, and everyone else was relying on Google/Apple maps being available at that exact moment when 100,000 other people were using their phones too.

I’ve had to trim my shelves in recent moves. I think I have between three and six shelf feet currently (some of them are C’s signed copies of my GURPS books). But I have a lot more in PDF.

If I am doing “off the cuff” RP all I need is an hour or two in advance to mull over the scenario, some notes on said mulling, pen, paper, and a randomizer. I usually use minimalist variants of Fudge as the system when doing this.

If I have time to plan I prefer to spend additional time refining the pre-gens, perhaps moving it into a crunchier system my players are more comfortable with. I tend to bring the core rulebooks for the system when doing this, but I can run GURPS or most versions of DnD (not you 4th) pretty well out of my head.

For a campaign with planning, longer term plot/NPCs, and a consistent setting I add a folder of historical documentation and character sheets, scenario notes, and so on. A long campaign can get an inch or so thick.

Having to trim one’s shelves is a dreadful fate. When my sister moved in to share my house three years ago I ended up having to cull about seven hundred books.

Oh, I totally agree. Since we’re now in two bedrooms again instead of one, I hope we will not soon have to do that again. Like the True Cross, our books miraculously multiply . . .