Today I was punching tokens out and putting them in baggies for a new game. Trying to think about what level of dividing up is helpful is something I struggle a bit with. Some level of separation makes things easier but at what point does it tip over to being a hindrance more than a help? How much time do you lose sorting vs the time you save not searching?

It did however lead to a bit of a revelation. By separating and organising at the end of the game the group gets a nice shared space to slightly chew over the game just played together. Using the time at the end rather than the start creates a bit of punctuation in the session when tensions can defuse and moments can be shared without giving away game state information/hopes and plans mid game.

I feel this is the best riposte to the BGG vid of sweeping everything in to the box method of a few months ago. Anyone here go for minimal organisation apporach?

As someone who thoroughly enjoys the tactility of boardgames, I find that sorting/organizing components is very relaxing and a good way to spend some quiet time alone, or to have a casual chat at the end of the game night.

As for the practicality of actually organizing components, I have roughly 3 guidelines:

You can tell when I last repacked a game by how it’s organised. In the early days it was by component type (one might then tip out each thing into a different pile or bits tray). More recently I’ve tended to put each player’s starting bits into their own bag which I can hand to the player during setup, and more generally to think in terms of minimising the shelf-to-play time.

I already knew that I wanted to do that, but I hadn’t thought of deliberately allowing the putting-away time to grow instead - thanks! While I’m getting the bits out and sorting them into their required configurations I can’t be explaining the game, and players who don’t know the game can’t help; afterwards, they can.

I think the next thing I do may be to label the plastic card-cases that hold most of my Colt Express bits. Easy enough for the individual bandits, but did the hostages go in with the prisoners, or…?

How much time do you lose sorting vs the time you save not searching?

For me, it’s less about saving time and more about reducing stress. In the middle of the game, if I can’t find what I need and the game grinds to a halt because of it, I get very anxious. (The same is true for finding something in the rulebook!) Plus, by doing the sorting at the end of the game, I can verify that nothing was lost. If I waited until the middle of the next game to find out that I had a missing piece, I’d lose it.

Plus, by doing the sorting at the end of the game, I can verify that nothing was lost.

That is an excellent point. Greater piece of mind that nothing has wandered off is another big benefit of the end of game sort.

If possible, everything any given player will need should go into its own bag

Since being introduced to this back in 2015 I’m a full on convert. Tokens of player colours plus starting resources and money tokens is appropriate/feasible.

This touches on another problem I’ve been bouncing around my noggin. How to label for non obvious collections. Combining non-related individual/small groups of bits can be annoying to remember which bits they go in.

First, it depends a lot on the game. I am sort of divided between organizing bags by different tokens needed by player/organized by different kind of component. On games like Architects of the W. K. I prefer having components separate by each kind, as it is an easy set up, while games a tad more complex (like dungeon crawlers) I have a set up that is per player thrown in.

Second, tidying up/set up. For tidying I agree that everybody helping up is nice, but if it is the end of the night. If everybody is rushing for another game, I prefer to do it later at home, organizing it in baggies. That leaves a chance for things going missing, but so far I have not had many issues, in the Guild there is always a pot for meeples and bits found from the previous session.

Then for set up, I come back to the “depends on the game/teach”. Some games are easy to set up, some games can surprise you the first time (I am looking at you Battle for Rokugan) and some games I would rather not play with all newbies. Finding that out takes a few goes sometimes, but eventually one finds the better way to get there, hopefully.

The absolute minimum of sorting, components that are easily differentiated go in one bag.

Next level is sorting components by weird methods. I once saw a game of Quacks of Quendlingburg where the ingredient tokens were sorted by number as it’s easier to select a colour out a pile.

Next level is sorting components by weird methods. I once saw a game of Quacks of Quendlingburg where the ingredient tokens were sorted by number as it’s easier to select a colour out a pile.

I’m also a fan of sorting in whichever way makes the game easiest to set up and/or play. I might try that strategy for Quacks!

This is pretty much spot on for my philosophy.

Plus, by doing the sorting at the end of the game, I can verify that nothing was lost.

Definitely with you on that. Although I’m not sure I’d go to the effort with Roads and Boats

I once saw a game of Quacks of Quendlingburg where the ingredient tokens were sorted by number as it’s easier to select a colour out a pile.

I’ve seen this somewhere before too but am yet to implement it. Would definitely speed things up and I’ll probably be fine with it after doing it, but the aesthetics is what has prevented me thus far.

My partner and I have a joke when the other packs away in a slightly inconsistent or random looking way (eg blue and green pieces together) the Philosopher David Hume (from Glen More 2; Chronicles) shows up to tell the other that their packing arrangement isn’t elegant.

I don’t know why it stuck as a joke.

I never sleeve. It’s a waste.

I like to make bags for a “player start pack.” If possible.

As with any wheeze the rub comes in sorting the bits into numbers in the first place I guess - but it’s a great idea if you find looking at colours easier than text.

I haven’t played Quacks with anyone with a colour vision deficit [ETA: that they’ve told me about]; I know the bits have symbols, but I don’t know how much that would help in picking them out of a pile. Must try it some time.

I usually throw the insert and bag them all.

Separating personal and central pieces is the intuitive one. If the “bank” is small enough, I just put all the resources in one bag as y’all pick up from the same source anyway, especially if the resources stands out from each other. i do separate minis (if there’s any) from the wooden/cardboard bits.

So who needs a Big Box? 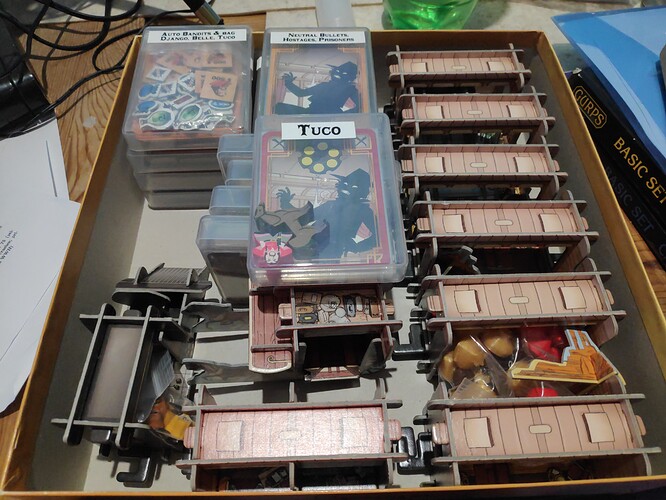 (Lower left tucked into the engine: small bag with Marshal and Shotgun. Lower right among the carriages, the bag with all my 3d-printed loot. Upper right, the Time Travel Car.)

I often build inserts for my games, especially those with a lot of resources—so I can have a faster setup.

But not all games require trays. Some are fine with plastic bags. I remove the cardboard inserts most of the time, unless it is “functional”.

In both cases, I do my best to have “Starter Packs” for each player sometimes with starting resources already added in.

If the number of central resources and components is small enough, I bag them together and empty them into one of my wood bowls that are reserved for games when playing.

With card games, I try to separate cards by type if the whole deck doesn’t fit in a single bag. If it does I put them all together.

Before I started building inserts I bought a bunch of little plastic boxes that stack nicely and fit into game boxes (those are made specifically for games)… these move from game to game. Usually they go to a game that would do well with an insert, so they are used there for a while, then I make an insert and they go to the next game “in need”.

Setup speed is more important than tear down.