A strange thing to be irked about

Yeah, going to get a bit political here. Other mods, feel free to mod me.

I was watching the new NPI video on Bloodborne (which is, incidentally, a jolly good review): and I got hung up on this: 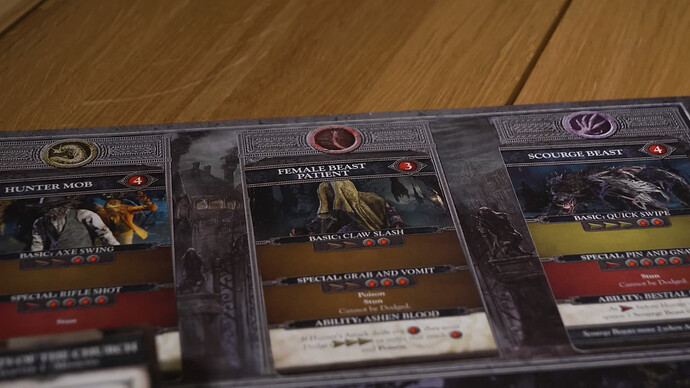 Nothing in the game gets marked “male”. Male is just normal, it’s what we assume everybody is, even horrors that want to eat your face. But female, female is different, female is notable. I suppose I should be grateful it doesn’t have a hair bow or massive breasts.

Boardgames can be better than this.

(And if it’s a term from the video game, that was a good time for the designers to say “no”. But from a very quick skim it doesn’t seem to be.)

I think it is a term from the game (Reference). As the other characters are called simply beast patients it is as you say a lazy short hand of normalising male over female.

It was a missed opportunity to do better however there is the possibility that the designers were not given that type of freedom with the license.

I’m going to say that’s a completely reasonable thing to be irked about!

Probably designed by one of those male designwomen.

I think this is why I would like to think his hands were tied but there is no reason why a different character with a less problematic title couldn’t be used.

But then Rising Sun and it’s multitude of sins (Wikipedia as a research tool, putting in a panda into a game about Japan because he thinks pandas are cool, seppuku as a game mechanic).

I want to think that they had a male one and then got cut out of production… so nobody bothered removing the “female” adjective after the restructure… If not, it is a very moronic move indeed.

Something I’ve been thinking about is: does this reveal how shallow their creative process is? At some point, someone should have reviewed the card to try to add more flavor to the game being “big bad 1” and the much more terrifying “big bad 2”, and at that point caught the obvious problem.

But, perhaps, any given design element was a 1-pass-print-it! Sort of affair.

Nothing in the game gets marked “male”

I’m not sure this is correct. The rule book uses the phrase ‘male beast patient’ on page 4. Also it looks like a picture of the male version of the card on page 6.

Ooh, interesting! Didn’t see any sign of that in the review…

Point of interest: Bloodborne (the video game, at least, and presumably the boardgame as well) has a number of recurring themes, including the moon, madness, the nature of reality… and above all else: Blood.

The game also branches into blood-related themes like menstruation, which then leads to themes about pregnancy. As in: Lots and lots of fetus monsters and mutated babies, the human reproductive cycle is very scary, Attack of the Killer Vaginas from Outer Space, and so forth.

Look up “Queen Yharnam”, or “Mergo”, or “the Orphan of Kos”, or… so much stuff, really. Want to get clobbered by a titanic abortion that looks vaguely like the late Prince Philip, wielding its own eyeball-encrusted placenta as a club? You’ve come to the right place.

Or check out the Blood Dregs that can be harvested from enemy Hunters, i.e. people just like you, the player character; do the items look like drops of blood laced with Eldritch God Sperm™? That’s probably nothing to worry about.

And yes, all of this can certainly be interpreted as being even more misogynistic; Bloodborne takes its Lovecraftian heritage seriously… even the problematic and outdated parts of it.

But in that context, maybe it makes sense to mark female characters as being unusual. Because in this game, they’re always exceptionally dangerous. Does that woman over there have a baby bump? Then you’re probably about to encounter a Boss battle.

Bloodborne is a very messed-up game.

When I looked briefly at the online manual I found a lot of reasons for not wanting to know more about the game than the one at the top of this thread.

But I am rather squeamish about horror themes. Having played Chaos in the Old World once, I agree with the guy who was recommending a Noggin the Nog retheme.

I’m with you 100%. This calls to mind, whenever I’m in a store or something and looking for my wife or in-laws, everyone expects you to lead with “the asian ones.” Even in my mind. Like being anything other than white makes you stand out. I have to intentionally describe the color of her jacket or something she was carrying.

Even then, they often can’t help because they are trying to find a white woman in a red jacket. And if I’m not looking for a white person, I’d obviously lead with that, right?

I would never tell someone I was looking for my own dad and describe hims as “the older white dude.”

The one with the teeth and the hair.

I guess it depends on how many women in red jackets were present vs. how many Asian looking women.
The most efficient way should always be to pick the characteristics that are most suitable for excluding other persons.